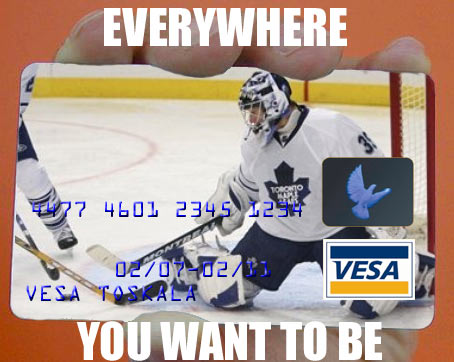 Wow. What a performance last night. 580 comments! I think we'll probably have to figure out a process for doing overflow threads so that things don't get too bogged down. Number of comments on The Omen's "live-blog": zero. Waking up to know that he's the same jerk he's been for the past 25 years of my life: priceless.

If there were horns honking on Yonge Street last night, they couldn't be heard or felt in Motown.

Ok. Parade jokes are hereby banned at PPP. It's too easy and if Cox can do it we can obviously do better.

Time to give Leaf fans some credit. While it's easy to pick on them for exulting too wildly over a three-game winning streak and continuing to live and die with a franchise that has disappointed for 41 years, beating the Red Wings 3-2 on opening night Thursday didn't produce a wave of "I-told-you-so" emails and "We're gonna win the Cup" voice mails.

Buddy, you have no idea of the shitstorm that you will encounter if this team a. does well or b. ever wins a Cup. You'll have to leave the country.

Everybody looked good Thursday night, and there aren't going to be many nights like that.

Thanks for the qualifier.

There's obvious holes in the lineup that aren't going to go away.

I just wanted to highlight that to point out that "holes" is plural and Cox showed his classic editing skills by missing it.

Let's see what everyone else thought!

It's an unfounded hunch, and it's probably the wrong decision, but here's betting the kid sticks around for more than 10 games.

Bruce Arthur you're on notice. I heard good things about you and so far you're two-for-two in the Damien Cox write-alike contest.

Indeed, if there is something that the Leafs can take away from this early-season win it is that, for the first time since Ed Belfour was in the crease, Toronto has a goaltender skilled enough to steal more than a few games.

To the Leafs' credit, Toskala did not face the same volume and quality of shots that he did on most nights last season.

Toronto, which blocked 11 shots, had vowed to pay more attention to defence. And though Detroit's snipers still created chances, they had to work for every one.

Michael Traikos saves it for the National Post with some good observations. From what I managed to catch on the adjacent television screen at dinner the Leafs definitely looked to be pressuring the Red Wings at every turn.

Then, when the puck dropped, it was the Maple Leafs who raised hopes and expectations.

Paul, do not play this game with us. Expectations remain the same: this team will work hard and grow and any wins are bonuses.

No one, except perhaps those with the crayons, expects this Toronto squad to vault into contender status based on an upset of Detroit, but there was much to like about the visitors last night. Mostly it was their speed that stood out as players such as Niklas Hagman, Dominic Moore and Nikolai Kulemin showed impressive zip around the Detroit net and through neutral ice.

And don't steal the coach's joke, pretend it's yours and ignore the fact that you work with a paste-eater.

The Leafs received strong play from goalie Vesa Toskala, stayed out of the penalty box, exhibited efficient puck movement out of their end and up the ice, used their speed to pressure the Wings into turnovers, blocked shots and held onto the lead against a potent offence.

The Red Wings raised their Stanley Cup banner before the puck was dropped last night. It is the second time since the Leafs won their last Stanley Cup in 1967 that Toronto players have been part of another team's championship celebrations on opening night. The first time was the New Jersey Devils in October of 2003