Share All sharing options for: Preview: Habs at Leafs 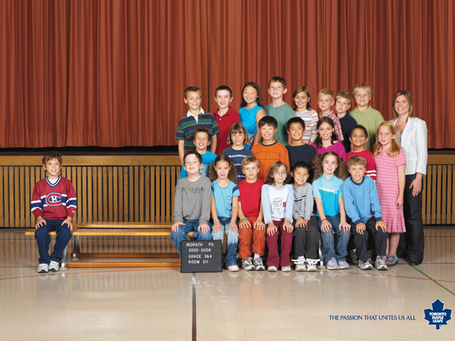 Fresh off a brutal loss last night in Buffalo, the Habs are going to be looking for blood. Hopefully they're just a bad team, and not a good team that played a single bad game and is ready to avenge their shootout loss by beating the cornbread muffins out of the Leafs.

The Leafs seem lighthearted and that's probably a good thing.

First, at a team dinner, someone crept under the table and poured sour cream on Wilson's shoe. Then, another guy in on the joke, called out "shoe check."

Grabovski's apparently become a fan of the Whopper while in Toronto:

"Just a regular game," said Grabovski. "Second one of the season."

Sitting a few stalls away, Nik Antropov – who has become Grabovski's friend – wasn't buying that.

"I know around the league, when guys come from teams they say how special it is when they play against that team," said Antropov. "They want to show what they can do and prove they were wrong. It's going to be a special game for him."

Let's hope that Grabs plays his head off tonight. The Tlusty, Grabovski, Hagman line was absolutely devastating against Detroit, and I think we'll see them together again tonight.

We're going to find out in a hurry if this team is actually a scrappy young group that's going to pull out wins against all odds, or if Thursday night was an oasis in a desert of terrible hockey. Either way:

Remember to sign up for the Pick SPG game here.