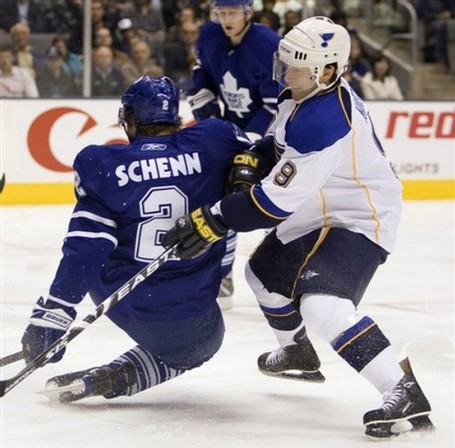 Remember Luke Schenn's beauty of a shootout goal? Well it doesn't mean shit, that was the preseason and this is the big show. The Leafs are looking to avenge their absolute manhandling by the Canadiens and win one in the ACC today shortly after lunch.

Remember to get your SPG picks in, the game is at one o'clock.

With Hollweg in, somebody else is going to have to sit. Wilson wasn't saying who that would be, but the best guess is one of Matt Stajan, Jamal Myers or rookie John Mitchell.

Ian White is still awaiting his first game action. He practised as a defenceman yesterday after spending a week practising as a forward.

That's because defenceman Jonas Frogren missed practice, getting an x-ray on a foot that took a shot Saturday night against Montreal.

Hollweg in is terrible. Toronto doesn't need a terrible "enforcer" who mostly just throws cheap shots from behind. Even dumber would be sitting John Mitchell, a rookie who's played well, in a rebuilding year.

Hopefully Frogren's foot is ok, otherwise we could see Ian White. I have to wonder if Anton Stralman killed Ron Wilson's dog or something.