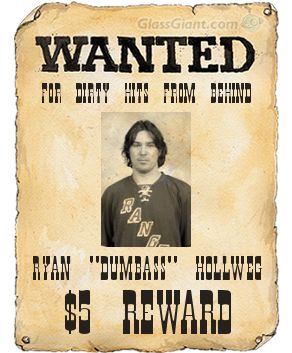 Ryan Hollweg doesn't want to watch football during Thanksgiving on Sunday. He doesn't play with the little kids. Ryan picks off the bacon from the turkey before it gets carved. He is the guy that eats all of the turkey skin before anyone gets served. He then takes the last slice of pumpkin pie before polishing off the final beer. In short, he's the worst person alive. In a mere split second he was able to turn a promising and dominating performance by the Leafs into a dogfight. Thanks dumbass.

The first period was the kind of period that Leafs' management hopes will be a regular feature of the franchise going forward. The St. Louis Blues were harrassed at every turn resulting in a number of turnover. Two of them found their way into the back of the net courtesy of Nikolai "Calder" Kulemin and The Poni Express. At the intermission everyone was aglow with the day off's first couple of beers and the feeling that these Leafers had rebounded from Saturday very well.

Sure, a turnover led to the Blues' getting on the board but that was just a momentary blip. You are allowed those when you work so hard to build up a three goal lead. Of course, that cushion can disappear as quickly as it takes a guy to realize that he'd rather hit a guy in the numbers than peel away as your team is on a breakaway.

Everyone in the building and watching the game on tv or online just knew that the Blues were going to get at least one. Well, we were half right. They potted two and the phone call came from Cynical Friend: This will trigger the collapse.

However, the Leafs' kept it together. Too often last year a break like that one would have led to an absolute blitzing. Hell, Saturday night the Leafs couldn't stop the bleeding after a couple of quick goals. So in that sense it was a bit of a step forward that the Leafs were able to regain the lead (although they blew it) and get into overtime. Naturally once it was a shootout all of Toskala's awesomeness magically disappeared and Brad Boyes potted the winner.

All in all, it was a good building block for the team and a deserved point. Not to mention the good news that Hollweg is gone for at least three games.

The game was largely overshadowed, at least in the game thread, by the news that Alexander Cherepanov died tragically during a KHL game, Thoughts and prayers go out to the player's family as we get the ultimate reminder that the purpose of today is to remember all of the reasons for which we give thanks among those our family and good health.

Thanks to everyone that stopped by during the game as we got up to 600 comments. DarrylKeeping and Chemmy also had boffo days in Pick SPG. They probably cheated.