Share All sharing options for: Better Know A Fanbase: The Oblivious Know-It-All

Are you sick and tired of being lumped in with every other Leaf fan regardless of relative intelligence, passion, and good looks? Ever wonder if there was a way to categorize different riders on the bandwagon? Well, if you've been wasting your time thinking about those sames questions then read on because I've wasted my time writing about the answers. 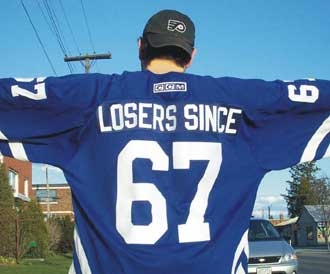 The guy in this picture is a Flyers fan (if you can trust his dirty hat) and seems to think that there is some sort of humour left in noting that the Leafs' drought is only eight years longer than his own team's.

This was as close to a picture of the Leafs' version of this kind of fan because the dress code precludes wearing your own team's colours. However, the traits present in this fine denizen of Philadelphia (I can only assume by the ramshackle bulding under his right arm) help make this one of the most infuriating members of Leafs Nation.

What are those traits? Follow me after the jump and find out:

This post was actually prompted by one call to Andy Frost's show after the Leafs defeated the Red Wings 3-2 last Thursday which went more or less like this:

OKIA: Ha well I watched the game tonight and I'm ready for a good laugh so I tuned into your show Andy.

Andy: Are you serious?

OKIA: Yeah, I can't wait to hear all of the parade planners call in to talk about planning the parade and forgetting all about 1967. So the Leafs beat the Red Wings? Big deal. They are 1-0. Did you know that if you factor in the preseason that the Leafs are only 3-5-2? That's pathetic!

Andy: Are you serious?

OKIA: So yeah, good on you Leafs Nation, lose your minds and I'll be here laughing at my fellow Leaf fans because they're probably out on Richmond Street waiting for the parade

Next Caller: Wow, I was going to say something else but that guy was a massive douche so now I am going to point out that the preseason doesn't count in case his head was too far up his own ass to know that.

Of course the rest of the show consisted of Leaf fans calling in and being happy about the result but realistic about the upcoming season. Of course, Ian Winwood had enough material for his next Guardian article "Leafs Nation's Sole Voice of Reason" after 45 seconds.

So what are the characteristics that the Philly Shower (of piss, thanks Ian!) and the Oblivious Know-It-All have in common?

This trait is shared by a few groups but the OKIA writes into The Omen's Mailbox and makes sure to mention how great he is as a writer:

Damien, thanks for giving us your thoughts in your daily blog and your weekly mail bag.

It is always a pleasure to read your insights and amazing to read the frothing-at-the-mouth  comments of self-proclaimed experts who see fit to insult and to see conspiracies everywhere.

I've always appreciated your honesty when discussing the Leafs.

OKIAs love to quote Cox and the Mittenstringers (that name is free to any band) when talking to passionate Leaf fans. Somehow they think that citing a source that is less reliable than Conservapedia makes them good impartial fans. Mostly, it makes them insufferable assholes.

A Distinct Lack of Passion

The OKIA will never call you up after a thrilling Leaf game to scream Go Leafs Go into your ear. If he even mentions the Leafs' success it's only to down play the impact. You'll never see him pouring into the streets after a Leafs win chattering with his buddies about how the Leafs have just turned a corner/started a roll/seen the worst of it.

Much like Damien Cox, after the Leafs win the Cup he'll likely bemoan the fact that the Leafs haven't defended a Stanley Cup win since 1964. Then he'll likely get punched in the face by a reveller while we all laugh.

Sure, he says he's a massive Leafs fan but how come he can't tell you who's leading the team in points? Or when was the last time you remember him begging off of a Saturday night out because "the Leafs are in LA tonight"?

More often than not his greatest source of Leafs information is the echo chamber that reinforces him beliefs (ie sens/habs websites and the Toronto media). He'll probably even think Matt Stajan should be captain because that's what "everyone is saying"

Our pal the OKIA can twist himself into any shape in order to discredit the Leafs and build up their rivals. This ability is most commonly viewed when looking at Leafs' prospects compared to those of other teams. Some prominent examples are the fans that said the senators were better than the Leafs in the late 90s/early 00s because their regular season record was better or those that argue that getting to the Stanley Cup Final and losing is significantly better than making it to the Conference Final and losing (hint: both team lost).

The latest examples of these mental gymnastics are:

For some reason, I have never ever met a female OKIA. Maybe the women that might fit into this category just drop the facade of being Leafs fans or maybe they just have a lower threshold for acting like complete jerks. Either way, they are like unicorns.