Share All sharing options for: A Montreal Myth Revisited

Yesterday I started a look at the groups that make up the Toronto Maple Leafs' fanbase with the most obnoxious of them all: The Oblivious Know-It-All. Somehow, I managed to forget their favourite hobby horse: blaming the Leafs' failures on the fans' loyalty. Thank God The Omen was around to remind me by writing this article. You see, if the Leafs would just abandon their team until just before they won a championship (better to wait until they win just in case) then it would force MLSE to ice a winner. Their favourite case study? The Montreal Canadiens.

Looking back just seven years, it's hard to believe the Montreal Canadiens were arguably at the lowest point in their marvellous history.

Nobody wanted to buy the team when Molson put it on the block. Few liked the spacious replacement for the historic Forum, 5,000 to 6,000 seats were unsold most nights and the team was in the midst of missing the playoffs four times in five years.

I've written about the Montreal Myth before but if Damien gets to recycle an article I will too. At least I know there will be some new readers seeing this for the first time.

There is a theory among the ill-informed that what will topple MLSE will be some sort of revolution by the put-upon proletariat. MF37 handily disproves that falsehood. The truth is that the vast majority of the money that MLSE rakes in comes in from their corporate brethren and if the French Revolution taught us anything it's that the nobility tend to stick together (and eventually get beheaded together but sadly Peddie and the MLSE board are likely safe from that fate...for now) so there is no respite in sight via that avenue.

So the next time someone says that Leaf fans need to stay away from the ACC to help save the Leafs laugh in their faces because they are completely clueless.

To find out more about the more insidious falsehood follow me after the jump.

The most dangerous lie of our time arose from this great article by this great article by Kim Jorn in response to Working Class Howard's version of this article. He did a great job of showing how clueless the Montreal cabbie was but in the comments a blatant falsehood made an appearance. A lie that I have heard perpetrated with pride by Montrealers repeatedly and echoed by an inebriated bird-watcher:

Montrealers love their team but will voice their disapproval of management, ownership and the players on the ice by withholding their money. When the Corey/Houle/Tremblay Habs stumbled, the fans damn well let them know changes were necessary and ownership listened. I think that Ballard, Stavros and now MLSE don't ever receive that message.

You've completely missed Berger's point about Habs fans-- which isn't that they should be applauded for being front runners, but that they should be applauded for going away when the team was as bad as the Leafs are now! And that you're proudly unashamed of your unwavering support of the Blue and White when it's painfully clear that what has allowed the Leafs to languish through these forty years of mediocrity is exactly that!

Those are two well thought out comments that addressed Kim's article and showed him to be lacking in knowledge, wit, and hygiene. Or at least they would have accomplished that if they had been made in an alternate universe where Habs fans had in fact gone away from their team in the past 15 years when they have been terrible much more often than not. Sure, the team is riding high after winning the East during the regular season last year but that's one good year since they won the Cup.

Unfortunately, in this reality, Habs fans have not wrought change with their Karl Marx-led revolt against George Gillett. The real improvement that is finally being seen came because their President, Pierre Boivin, was given the backing by ownership to bring in a proven winner as General Manager, Bob Gainey.

The truth is that Habs fans have happily continued to go see their heroes in droves and plunked down their hard-earned cash (one assumes but never really knows in a town like Montreal) to see the team that they love and they should be applauded for their devotion. Exhibit A in the case versus the alterers of history is below. Keep in mind that while that that trio of 94% seasons seem like some sort of exodus they were still good enough to rank in the top two in the NHL for average attendance. Not only that but if you take a closer look you'll see that those average attendances were still enough to outnumber the average number of Leafs fans that suffered in the ACC during that same period. 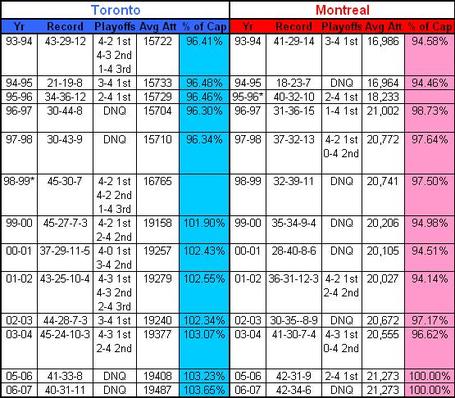 So we can finally put the canard that Habs fans are so otherwordly knowledgeable about hockey that they sacrificed their chance to see their adored bleu, blanc, et rouge in order to bring about change to rest. MF37's two comments hit back on the argument that individual ticket buyers can influence change since they comprise such a small portion of ticket revenue. The Leafs makes $1.9M a game. How much of that do you think comes from the SRO, Blues and Greens? As for the 5,000-6,000 unsold tickets, that is quite the claim. Either Boivin is lying or the NHL is snowing everyone under with their attendance figures. Regardless, I call bullshit.

To sum things up, MZ probably does it best:

More than any of that, though, is how ridiculously unfair it is for guys like you and Berger to blame the fans. Teams like the Leafs and the Red Sox have real fans, and there's no getting around that. It's why, as Kim Jorn rightly points out, a boycott won't work. If Leaf fans as a species survived the asteroid impact of the '80s, we'll survive this season. But don't you dare suggest that it's because we won't flick some internal switch and abandon a losing team (a trait [Ed.'s Note: which doesn't in fact exist] in Habs fans that you applaud) [now] that we have a losing team. It's not our fault that there's been some serious bungling at the management level. It's not our fault when players get injured. Losing 8-0 to the Panthers was in no way our fault.

** Attendance figures before the 2000-2001 season came courtesy of Andrew's Stars Page who thankfully archived the old ESPN numbers. The number from 2000-2001 onward come from the ESPN Average Attendance page.