Share All sharing options for: Game 4: Leafs at Rangers 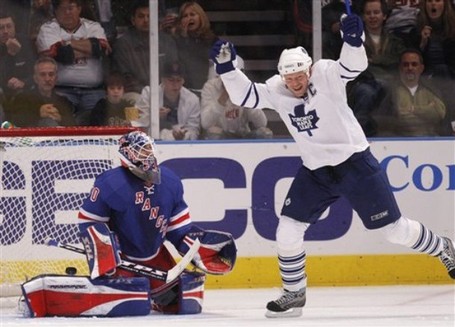 Hollweg out, Stajan in, according to Mike Ulmer. The Leafs are 3-1 in their last four visits to MSG, ask how I know!

According to the Rangers Report, the Rangers will be without Korpikoski (arm injury), Prucha (slow, terrible), Lundqvist (can't play all 82 games). In their place we'll see Nigel Dawes (young, talented), Dan Fritsche (talented young prospect, came over with Zherdev), and Steven Valiquette, who terrorized the poor Leafs last season at the ACC.

Toronto comes in to this game on three full days rest, after hopefully tightening up the PK after Monday afternoon's turkey tarnishing Thanksgiving travesty. The Rangers lost to Buffalo on Wednesday night, having only gotten nine shots on goal in the first two periods.

On a closing note, I'd like to say that writing a game day preview was really very pleasant, due to the the fact that the Rangers actually have blogs and fans. I'll be at the game tonight, hopefully emailing pictures to PPP, my hetero life mate, for him to post in the game thread. I might pop in to the game thread at intermission.

PPPp.s. Make your Pick SPG selections. Also note that Gary has been nice enough to add a feature that lets your previous selections ride.