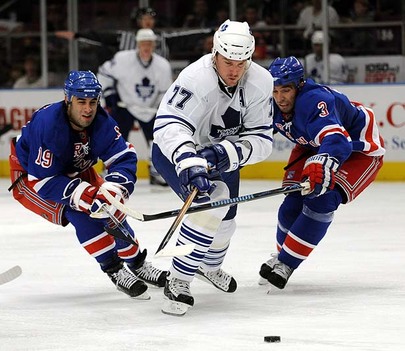 Describing the Maple Leafs offence as anemic would be giving blood conditions a bad name.

Well Steve, attacking the oppsition's net is not the easiest thing in the world to when you get assessed four straight minor penalties. Even The Hockey Rodent agrees that the officials were not on top of their game:

More erratic grew the officiating of Marc Joannette and Chris Rooney... which had already drawn considerable second-guessing in the middle frame.

Only a few Leafs managed to get any praise last night and for those of you that watched the game one of them will likely surprise you.

Matt Stajan clawed his way out of the Maple Leaf outhouse last night. He had a chance for a view from the penthouse, but fell short because of that old bugaboo from the Paul Maurice era: the dreaded shootout.

Stajan – the best Leaf not named Toskala last night – had been benched in that shootout loss to St. Louis on Monday.

Are you serious Kevin? Instead of staying on his feet and taking another hard stride to get a short-handed two-on-one in the first he stupidly dove for the puck. He got 0 shots on net and took a penalty shot that reminded me of Robert Reichel's majestic attempt against the Flyers.

For the second time in four games, the Leafs faced a team's No. 2 goaltender.

And let's end on a bright note:

Schenn played a season-high 25 minutes 50 seconds, second only to his defence partner Tomas Kaberle at 27:33.

Say it Timmy, Schenn's sticking around.