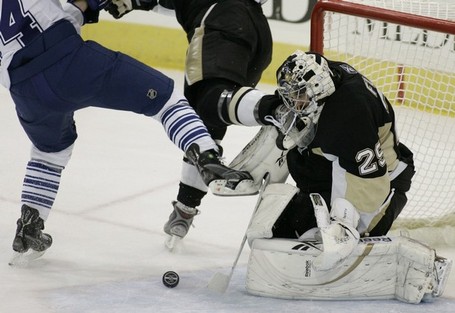 DON'T STEP IN THE CREASE IT IS MADE OF LAVA

Rough game for the Leafs last night. Luke Schenn was actually on the ice for an even strength goal against, but it's good to see him getting lots of time on the penalty kill.

Unfortunately the PK went 2/4 last night, and the power play went 1/6. It's hard to complain about the PK after Friday night's spotless showing, but even with that the Leafs PK sits at a less than sterling 71%, good for 26th in the NHL. At 13%, the power play is ranked 20th.

Players like Hagman, Kulemin, and Grabovski are showing promise, but it's easy to see why fans in Montreal were frustrated with Grabovski. He makes good moves with the puck, but can't string it together to score.

This isn't really a doom and gloom recap of one of the best teams in the league beating the Leafs. Toronto hung with the Rangers all night on Friday, and last night Curtis Joseph made a better showing than any of Raycroft's starts.

Ron Wilson has a lot of work to do with this team. His first priority has been trying to steady the defense and install a system. His next priority needs to be fixing the penalty kill. If I understand Wilson's mindset, he wants to steady this team from the back end forward, and to be honest I think in a month or two the Leafs will be giving up fewer goals. Then all they'll have to do is figure out how to score.

The Leafs aren't making the playoffs this year, but if Wilson can install good fundamentals and develop players like Tlusty, Grabovsky, Kulemin, Schenn and Stralman, games like last night will go much differently next year.