NNN: Crosby gets a lot of points

Share All sharing options for: NNN: Crosby gets a lot of points 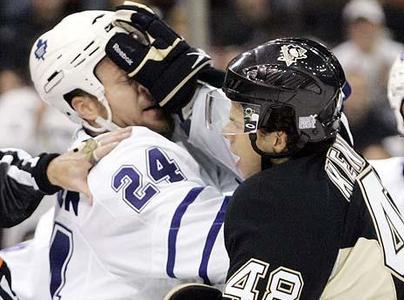 FrankD at Pensburgh should probably talk to us more:

Halfway through the first period I was prepping myself for a very bitter and angst-ridden post.

I wouldn't worry about being down 1-0 to Toronto if my men's league team was playing.

Basically  for six minutes or so the Penguins were stuck in their own zone, grabbing a quick breather on the occasional clear.

At least our power play put some pressure on, I guess.

The Kid used the Toronto Maple Leafs – one of his favourite patsies – to springboard past a number of career milestones, scoring a goal and adding three assists in vaulting the Pittsburgh Penguins to a 4-1 win at the Mellon Arena.

Crosby is 21 years old. He's legally able to drink everywhere except Saudi Arabia. More importantly, he's a genuine super star. If you're not Wayne Gretzky, you're not as good at hockey as Sidney Crosby is. Sidney Crosby could deke you out of your own bed to have sex with your wife. Listen, I understand that it rhymes, but can we stop calling him "The Kid"?

Also, Carlo Colaiacovo was reinserted on the blue line, with Mike Van Ryn joining the scrubs as a healthy scratch.

Hold on a minute. I was always under the impression that doing things like calling players "scrubs" was why I wrote from my mother's basement and hacks like Damien Cox got paid money to watch the Leafs at the ACC.

If the MSM is allowed to call professional athletes, who could beat frail reporters and bloggers to death in seconds, "scrubs", then I think the Star should probably just fire their reporting staff and hire PPP and I. Shit, the Pensblog could win a Pulitzer.

It boggles the mind why the Star is so negative though, I mean, the Pittsburgh Penguins on ice success from 2001 to 2006 couldn't give any clearer message to Leafs' management; Tank for Tavares.