Share All sharing options for: Game Recap: Ducks 3 Leafs 2 (SO) 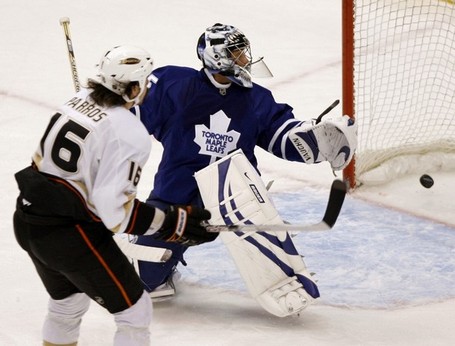 This wasn't a bad effort from Toronto. Just check out the shots on net:

Anaheim opened the game with a pair of goals. A blast from the point that may have been deflected got them on the board before George Parros sniped the top shelf to put Anaheim up 2-0. Toronto's only penalty of the game was a trip on Frogren.

In the second, a point shot from Kubina hit the boards behind the net and came out to Antropov who promptly deposited it in the net to make it Ducks 2 Leafs 1. Toronto dominated the second and third, and their persistence paid off with the goalie pulled, as Antropov threw a rebound in with 53 seconds left on the clock to send it to OT.

The game wasn't all bad though. The Leafs forechecked well and played great D. It seems like guys are really buying into Wilson's system. The Leafs also made tons and tons of chances, even if they didn't capitalize on many of them, and that's promising. It's good to see a group of young guys keep digging and scrapping right until the end of the game, and that effort got us a point tonight.