NNN: Ron Wilson Is Good for the Pacific Division

Share All sharing options for: NNN: Ron Wilson Is Good for the Pacific Division 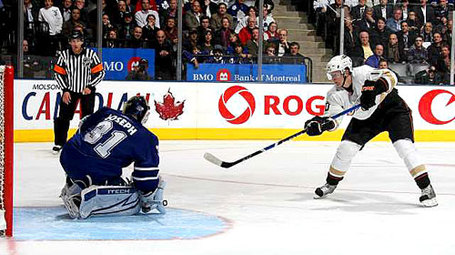 From the LA Times:

This experiment should never happen again, unless the Leafs are honest to god tanking, in which case they should feel free to email me. I would like to coach one game in the NHL and if we're losing on purpose there's really not a lot I could screw up, thanks in advance.

The Ducks failed to register a shot in the third period -- the first time in franchise history that has happened -- and Toronto outshot them, 28-7, over the final two regulation periods and overtime.

This wasn't the first time Toronto actually had a comeback to force OT, it just seems like it.

From The Battle of California:

Look, Earl. This is the Negative Nancy Notebook. It's my job to be pithy and sarcastic while chronicling what other pundits say about the Leafs. You need to give me more to work with.

Damien Cox steps up to the plate:

Ron Wilson warned members of the media during training camp not to try and read his mind.

Well, let's give it a whirl anyway.

Didn't we just go over this? I'm the edgy and irreverent one here Damien.

It continued with sending local boy Matt Stajan to the press box for the third game of the season, giving talented Carlo Colaiacovo the same treatment (and again last night) and busting Alexei Ponikarovsky down to fourth-line status.

Stajan - not good. Colaiacovo - good but injured. Probably expendable. Ponikarovsky - good in theory, not in practice.

Ron Wilson hasn't demoted anyone for anything less than being crummy at ice hockey.

But taking him out, even though Joseph was cold and Toskala had played the 65 minutes of regulation and OT, also meant that Toskala shouldn't assume that Wilson would blithely ignore his weak shootout record out of deference to his status on the team.

Better watch over your shoulder Vesa. Keep holding teams to 2 goals or less and losing while CuJo stars in the shootout and your days are numbered pal.

Joseph officially took the loss, but more important, he would have got the win if the result had been different, not Toskala.

[The Maple Leafs] officially took the loss, but more important, [they] would have got the win if the result had been different.

This sentence doesn't say anything. I'll paraphrase it again for you all: The team lost, but if the result had been different they would have won.

"(Toskala) has to find a different way of stopping the other team in shootouts," Wilson said.

But blame Vesa, not the three guys a night for the Leafs who enter the shootout and don't score. Not the coach who put Stajan and Blake in against the Rangers the other night.

I'm not an NHL GM, I just think that Ron Wilson should probably not be whittling at Toskala's confidence. Living in NYC a lot of the guys I play hockey with don't care about Toronto, but Saturday morning my phone was full of messages like "Wow Toskala is an insane goalie".

It's Toskala's fault the Leafs can't score. Maybe he should start talking to Ron Hextall.