Share All sharing options for: Preview: Leafs at Bruins 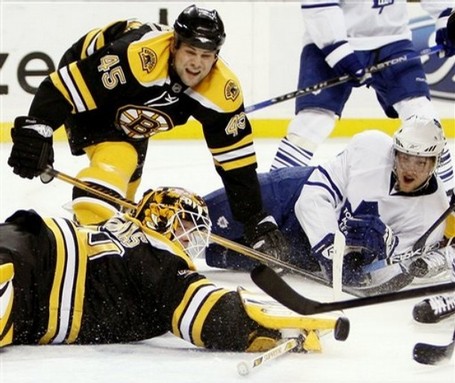 Jason Blake is expected to be a healthy scratch for Toronto.

The result is a revolving door of players on the first line and in the doghouse. Jason Blake might have skated himself into oblivion – tonight, anyway – with some recent lacklustre performances.

In his place we'll probably see Ryan Hollweg. Bruins fans and Patrice Bergeron, everyone who actually roots for the Leafs is sorry in advance.

Bergeron is speaking about what is all but a 100 per cent return from a hit from behind last season that left him with a broken nose and Grade 3 concussion, which sidelined him for the remainder of that season.

Luckily for Toronto, the Bruins are also 0-3 in the shootout. The Bruins are also having scoring woes, potting three goals in their last two games. If the defense that confused and enraged Anaheim on Tuesday night shows up in Boston tonight, we could have another 0-0 snoozer on our hands. For the record, I'm ok with that because Toronto's biggest hole is offensive production. If the Leafs can become a shut down team and add scoring up front that will be great. Boston probably isn't going quietly into the night though:

[Chara] and assistant coach Geoff Ward lined up 60 pucks on the blue line, inches apart. A few youngsters pressed their noses against the glass. Even his teammates stopped running a drill at the other end to watch the show.

They're a talented young team with some goaltending issues (Tim Thomas is sick right now but will have grandchildren before Boston is a legitimate contender in two or three years and Manny Fernandez is untalented).

Keep your eye on Phil Kessel tonight. Since being benched in the playoffs last year Kessel has gone on an absolutely insane tear:

Since returning from that stay in the press box, Kess has played like a madman. Three goals in his last three games in the playoffs, and five in five so far this season.

That was posted prior to the Bruins playing Buffalo, where Kessel potted another goal, to make his stat line this year 6GP 6G 1A 7P. Patrice Bergeron has been described as snake bitten despite his stellar play, he could have a breakout night tonight if Toronto's defense doesn't show up.

The Bruins have been a thorn in the Leafs' side lately, here's hoping that changes tonight. Go Leafs go!