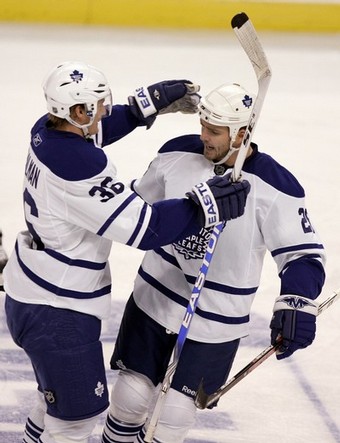 The first period didn't go well for Toronto. There were no shots on goal for either team until six minutes in when Matt Stajan opened the shooting. The Bruins got a goal when Bergeron deflected a sharp angle shot that found the upper opposite corner of the net, and then got a second 31 seconds later when Blake Wheeler stickhandled around Toskala, fired a centering pass between Toskala and the net, and Stralman put it in. Matt Stajan got absolutely leveled by Dennis Wideman and it looked like Boston was going to absolutely level Toronto.

The second period opened with Milan Lucic hitting Mike Van Ryn through the glass. Toronto persevered and opened the scoring when Mike Van Ryn threw a wrister into the top corner from the blue line on the power play. Two minutes later, Antropov fired a rebound into the same place in traffic to tie the game up. In the third period, Anton Stralman fired a laser beam five hole to apologize for scoring on Vesa earlier in the game. Hagman took off with under two minutes to go, caught a home run pass, and was hooked down to put Boston shorthanded to end the game. With three seconds left Hagman took a shot from downtown and scored his first second goal as a Leaf (thanks koopa kid).

In summary, both of Boston's goals were avoidable. The defense looked fairly solid aside from Stralman's brain fart, but he might not have seen the puck, so I'll give him the benefit of the doubt.

The power play looks "bad" still, but it went 2/7 which is acceptable. More importantly though, the power play had excellent passing, excellent puck position, and it looked like the Leafs were in control of the play. If Toronto can keep doing that, and build off of it, they may just have a successful power play yet.

Thanks to everyone who dropped by the game thread, here's the comment breakdown for tonight: