Another strong effort by the Maple Leafs nullified the ottawa senators big guns of Jason Spezza, Dany Heatley, and Daniel Alfredsson. The senators came out with a bit of jump but once again the Leafs' constant pressure, excellent defensive coverage, and some timely scoring got them the win. That's two in a row and it's officially a winning streak. As for the fans, they are happy: 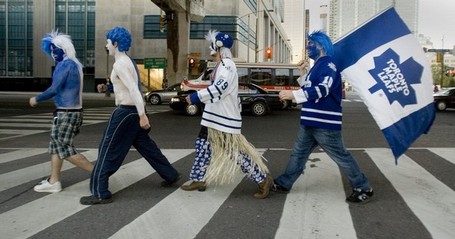 The most infuriating part of the game (because there was not much to get upset about with regard to the Leafs) was that yellow Chris Neil. What a gutless player. He goes years without fighting anyone on the Leafs and then he scraps with Schenn? Gutless. Then Schenn gives him a second chance at life by not ending it when he got Neil down and The Gutless Wonder tries to get shots in on Our Luke and Saviour after he steps on a stick? Gutless.

But that's not all! Throws a leg out at Stajan? Gutless. Throws a knee at Kaberle's head halfway through the second after Kaberle slipped? Gutless. Won't fight Hollweg but he will make funny jokes about getting hit from behind (that's what she said)? You betcha, gutless. And to top it off, resident veteran Jamal Mayers has enough of his shtick and decides to go all Shaft on his ass and Neil does his best Sean Avery impression and looks to the ref for help. Verdict? Gutless.

When Ron Wilson was hired there were some doubts about whether he could handle the media or the pressure or the situation in the locker room. Well, the jury's still out on whether he'll eventually snap and choke Al Strachan with his ugly tie but Ronny and Cliff have done a good job of rebuilding the dressing room. There have been doubts about Wilson's methods but through 10% (that's not much eh?) of the season they appear to be paying off.

Every player on every line is buying into the system completely. The Leafs outskated and outworked a senators team on which the sun is setting. If it wasn't the Kulemin-Grabovski-Hagman line scuryring after any loose puck then it was Antropov skating around with the puck shielded from harm until he decided it was time to give Poni a goal.

Other highlights of the game include Volchenkov trying to hit big #23 and having the Poni Express run right over him, Mitchell plowing over the sneaky-dirty Fisher, and fans not really booing the Weasel because a. he was absolutely invisible and b. because Mark Bell exacted our revenge.

So the Leafs move to 3-2-3 after eight games and have really only had a handful of bad periods. Mike Milbury might be right in that Wilson has done too good of a job turning the Leafs' lemons into lemonade but there is still a long way to go. For now, let's enjoy the 1-0 lead in the Battle of Ontario.

As for the game thread, here are the vital stats. Thanks again to all who came out.