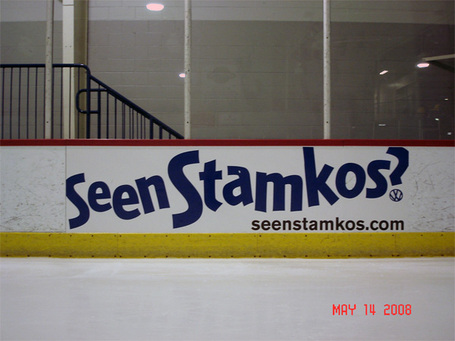 If you haven't seen Stamkos, your first problem is probably that you're looking for him on the ice. Try here instead. As inept as the Leafs have been, it boggles the mind that someone could be worse. That someone is the Tampa Bay Lightning. Their ownership brought in Barry Melrose, who couldn't win with Gretzky in his prime on their team, to lead the basement dwelling Lightning. Uhhhhh...

The Tampa Bay Lightning are 1-3-3 after seven games, having scored only 11 goals in that span. Toronto is 3-2-3, tied for 8th in the East. Tonight's a big night for Toronto.

Hopefully Tampa continues to bench Stamkos, and Lecavalier and St. Louis continue to be ineffective. Oddly enough, Tampa's only allowed 18 GA, giving their starter Mike Smith a .941 SV% and a 2.13 GAA, which is insane (even if it's only over five games).

From the Globe and Mail:

Mike Smith will start in goal for Tampa, while Vesa Toskala will start for Toronto. The Leafs will keep the same lineup as they did on Saturday, meaning that Jonas Frogren, Carlo Colaiacovo and Ian White will sit.

I love having Schenn around, but if it's at the expense of Colaiacovo's development I'm not sure if it's worth it. Toronto needs to move some defenders, I just hope the guys we keep don't slack off once their job is safe. I know Frogren is chomping at the bit to play. If our six d-men can play like they've been playing lately, I think Toronto has a really good chance to come out swinging for the fences tonight in pursuit of two points.

Mirtle wants to see the same:

Here's hoping that trend changes tonight because I don't get tickets to games at the ACC all that often. I'm going to predict a 3-2 win by the Leafs as the Barry Melrose experiment continues to go wrong.