Predictably, the Leafs lost against the Lightning. It was a pretty uneven game in terms of the tempo. The Leafs definitely outplayed the Lightning but the difference in star power told as Vinny Lecavalier scored two including the game winner. Steven Stamkos got an imaginary assist to record his first point as an NHLer. Thankfully it was the only point he picked up. 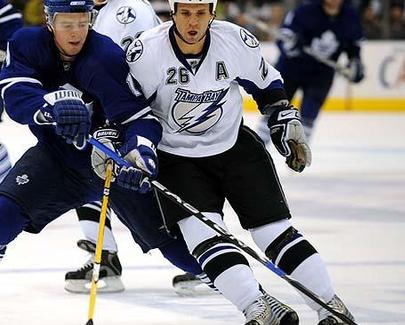 MF37 mentioned it in the game thread comments but here's the number one lesson that the Leafs will have learned tonight: without perfection, they'll lose. For all of the hustle that the Leafs showed, which they have demonstrated in almost every game this season, they managed to make a few glaring errors. Unluckily for them, Lecavalier was not in a forgiving mood as he pounced on two defensive errors.

The first came as Tomas Kaberle didn't anticipate a cross-ice pass from deep in the Lightning zone. His hesitation and poor positioning allowed Lecavalier to take the pass almost in stride behind him and slot the puck behind Toskala.

The second came on the powerplay after Dominic Moore won the draw but Finger's hesitation led to a loose puck which Lecavalier pounced on before he roofed a backhand. Stamkos apparently used his mind to push it towards his captain and was rewarded with an assist.

The Leafs actually played a pretty disciplined game except for three delay of game penalties which is patently ridiculous. They managed to draw six powerplays and they converted on two of them. That kind of makes it ridiculous to harp on the powerplay but included in the ones on which they didn't capitalize was a 5-on-3 that lasted over a minute.

There were some bright spots on the Leafs. John Mitchell must have felt his ears burning earlier because he finally played a regular season game that featured a lot of what he showed in the preseason. As one very handsome blogger noted that Mitchell was doing okay with what he had been given and that with more he could do much more. He took Kulemin's spot and was probably the most dangerous forward on the ice after the switch.

Another Leaf that impressed was Mike Van Ryn who potted his second goal and extended his points streak to four games. If the plan is to pump and dump Van Ryn then I think it's going exceedingly well. He looks confident on the defensive end and is showing the offensive side to his game that saw him post 103 points in three seasons on a terrible Panthers team. A few more weeks of this play and Fletcher will be fielding some serious inquiries.

And of course, the Antropov-Stajan-Poni line was good again. Antropov is ni-ice.

Thanks to all who came out for the game thread. There is a new king at the top of the heap: