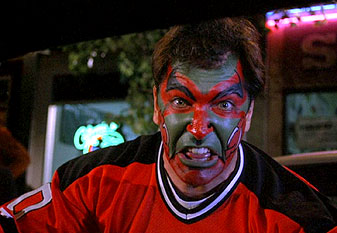 Greg Wyshynski tries to cover his stink with face-paint

So does anyone else realize the big milestone? Well, yesterday Prudential Center celebrated its one-year anniversary of Devils hockey. Yup, a solid 365 days had passed since that inaugural drop of the puck. It’s just too bad that said puck-drop was the only thing worth remembering on that night, but I’m not here to split hairs.

Thank God the Leafs missed the celebration or else the game might have sold out. Any fans travelling to tonight's game would have had to deal with the Leafs' terrible record in those kinds of games. Now they can focus on worrying about holding on their wallets.

REMEMBER TO MAKE YOUR SPG PICKS.

So a night after a rookie gets his 'first" NHL point on the game-winning goal against the Leafs what do they get to face?

While they are clearly excited to play, especially Halischuk who will make his NHL debut tomorrow night, I do feel bad for Rod Pelley.

In Lou We Trust

So Halischuk with the winner. But let's be honest, it's not just rookies that break out against the Leafs. Struggling veterans can use the boost as well, especially ones coming back from injury. Do the Devils have any of those?

"I'll make a decision tonight. I'll see how I feel when I get down here this afternoon," Langenbrunner said. "This was the first time I skated (since Friday). I want to make sure there is no bad reaction."

Actually, Rick Chere offers up a lot of info at his blog and he's a member of the traditional media. Weird. The Devils actually have some other injury worries:

Letourneau-Leblond, who probably sustained the injury when he was checked into the boards by Flyers forward Riley Cote Saturday in Philadelphia, will be held out until it heals.

"He's progressing very well," the GM said. "We'll just have to keep going day by day. I don't want to put a timetable on it. He's walking and has no cast. He's exercising, (doing) everything but skating."

Bobby Holik (broken right pinkie) will have stitches from his surgery removed Wednesday but not the pins that were inserted in the finger.

Wonderful. A wounded animal, coming off of two losses to the Flyers, await the Leafs in an arena that witnessed one of Toronto's most embarrassing moments. Ok, it wasn't the arena but the banners will scare the players nonetheless.

So far there's no word on any lineup changes from Ron Wilso so it's the same cast of characters that couldn't beat a fellow basement dwellar going against the best goalie in hockey history. Yay!