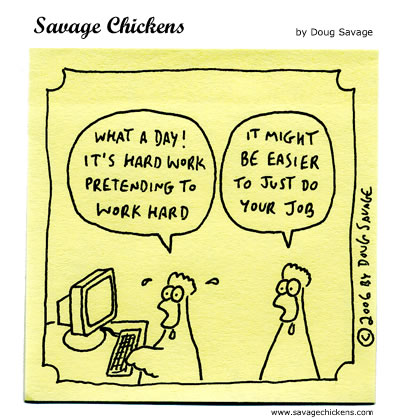 Toronto worked their BALLS OFF, and frankly deserved to win this game… Ron Wilson.. you can coach my team any day sir!

The Leafs' work ethic has not gone unnoticed by anyone with two eyes and a functioning brain.

It's coming along. I had to shake some trees earlier [with the benching of Matt Stajan and Jason Blake], but everyone is starting to grasp the message. They are certainly playing with confidence and that shows in the work ethic.

This goes back to DGB's post. The lesser skilled team can only win by outworking their opponent. So far the Leafs have done that against some pretty good teams. The key to implementing any policy is across the board buy-in and it looks like the Leafs don't want to get shaken out of the tree.

Toronto got the better of the Devils in the faceoff circle going 42-for-76 paced by former Ranger Dominic Moore’s 7-3 output. Madden was New Jersey’s best going 14-13 on draws.

The Battle of NY

This is an area where the Leafs have put a lot of work into improving. Matt Stajan is over 50% after being around 43-46% his entire career. Dominic Moore is one of the top face-off men in the league after the first month of the season. That is a huge factor in every facet of the game and one which Wilson has focused and over 100 years of coaching and playing have paid off. Wonder if all of that experience will hurt Luke Schenn's development?

7. After watching an entire game of him, we still don’t care about Luke Schenn.

Hmmm, if that blasphemous thought is shared by Devils fans then maybe they are staying away from Devils games because they think that he plays for them. As for us, we're happy having this kind of guy on our team:

The 18-year-old blueliner didn't bother retrieving the puck that produced his first NHL point on a shot that Matt Stajan deflected past Brodeur for the first Leaf goal of the game.

Soon enough! And from today's Idiot In-Box, here's a good e-mail to laugh at:

I appreciate your attempts to ground Leafs nation in reality with your opinions. I have more of a comment than a question. I think this year's trade deadline represents the biggest opportunity for Cliff Fletcher to leave his mark on the Leafs for years to come.

Nik Antropov and Vesa Toskala are two key assets that should be converted into future picks/prospects. Antropov can fit in anywhere given his menial cap hit and the Leafs should be able to get a 1st and a 2nd pick for him. Ottawa's goaltending problems are just that - problems. Toskala may be able to pry Brian Lee and Brian Elliott from the Senators.

Damien must be doing a horrible job of grounding Leafs Nation in reality if trading Vesa for Lee and Elliott seems realistic. Basically, he wants to move a very good goalie to a provincial and divisional rival for two guys that haven't been able to crack the senators lineup despite playing at two positions where the sens are supremely weak. Yeah, let's pick those cast-offs up! Giving an even worse answer would seem difficult but The Omen manages it by using past results to predict future results. Hey, whatever happened to Bear Stearns?