In Which I Explain Some Simple Truths

Share All sharing options for: In Which I Explain Some Simple Truths

I am not rich. If I was I would buy a sports bar and spend my time hanging out with my regulars, greeting new patrons, trading jokes with everyone, and having a good time. This is a close approximation to what I envision it might be like during Leaf games: 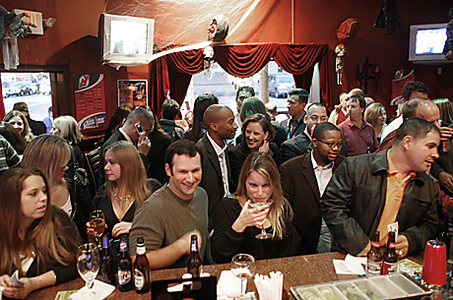 See, there's LD drinking heavily at the front and Jared trying to hit on her and a lot of people having a good time with lots of good conversations. Obviously I would have much larger televisions but that's the general vibe I'd want to establish. Since I don't have the money to set that up I have worked to create an online version of a sports bar and luckily so far I have attracted the right kind of partner in Chemmy and the right kind of crowd in all of the rest of you with one notable exception.

We run this site for fun. No one makes any money off of this site. I don't want to have to make posts like this one. There are community guidelines to ensure that newcomers understand what they are getting into when they join our growing family. If you are thinking of joining or commenting more then I suggest that a good idea is to get the lay of the land to get a sense of the vibe. No one's asking you to assimilate but recognize the environment that we are trying to develop.

If you don't then I don't want the stress of having to wonder if you're going to scare off commenters that I really like having around and whose opinions I enjoy reading just like I would not let some guy come into my bar and start calling a regular patron a douchebag. Especially not after four goddamned warnings. 170 of 171 (even the freaking Montreal fans) have understood that simple truth and fit into the group just fine and I appreciate it.

So that's why the Ban Hammer came out and some of your comments were lost (apparently any replies get deleted which is a shame). I hope you'll all agree with the decision because I honestly took it while thinking of the best interests of our group. Plus, I look freaking great wielding a hammer: 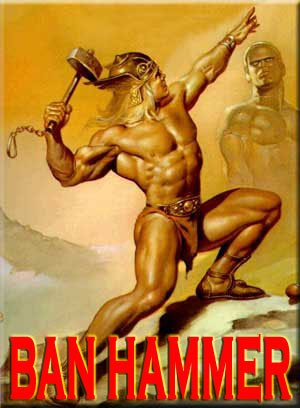