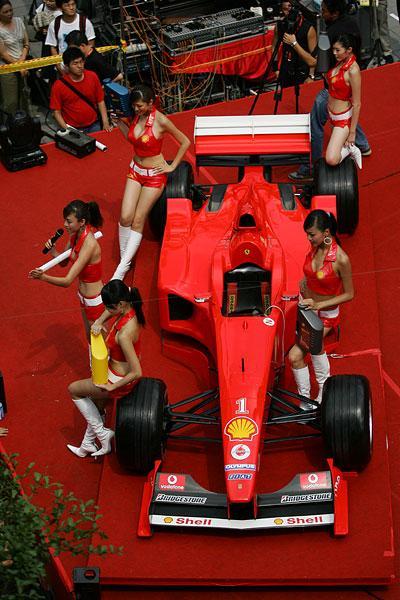 As the older guard will remember, last year I ran a game I called SPG. The goal of the game was to predict the Maple Leaf that would record the first shot on goal, score the first goal, and take the first penalty (McCabe) in each game. Eventually, I'd hunt down the right answers and tabulate the scores. Since it was a pain in the butt I rarely did it until I had a few games in a batch and most people had forgotten.

No longer! Thanks to a internet friendship spawned from cheering for the Capitals during last season's playoffs (sorry for bringing the curse over guys) we now have a ridiculously awesome website designed and coded by a true philantropist.

More details are over the jump. That was the second picture that came up in Google Images for "SPG". Turns out it stands for Sales Promotion Girls.

The first thing that you'll notice is that it is awesome. The second thing is that you are required to create a profile. If you want to play then please use your username so that it's easier to track who is who (whom?). If you are new to the game and interested but don't have profile here then this is the perfect chance for you to join the growing (and greatest) community of Leaf fans.

The second change is that the game has been expanded. As anyone from last year can tell you the game was ridiculously tough to play. This year we've expanded it to require decisions in every period including overtime and shootout (less the first penalty). You can choose any player from the roster or no one if you think that the event won't occur (ie a shot in a period against the Red Wings). That means that it is incumbent on you to know who is scratched or injured.

The picks will be open until the NHL.com start time not when the puck is dropped on TV. You can make all of your picks in advance (bad idea) or you can pick them in bunches (better idea) or you can go game by game (best idea). After each game I'll input the scoresheet and by some magically coding that I could never create/hope to really understand the points will be tabulated.

When you register make sure to set your loyalty to the Maple Leafs. This will do two things. First, it lets me send you an e-mail invite to join the Leafs' league. Second, that ensures that you can only pick the Leafs games because that's how the game is set up for this season. At the end of the year we'll take suggestions so if one of them is "Dude, why not all 30 teams?" then save it for the end of the year so it doesn't get lost in the 4000 posts between now and then.

If you have any other questions (it's hopefully a very straightforward game considering how much back and forth went on over the summer) then post it here and I'll get you some answers.