Share All sharing options for: Gameday Preview: Rangers at Leafs 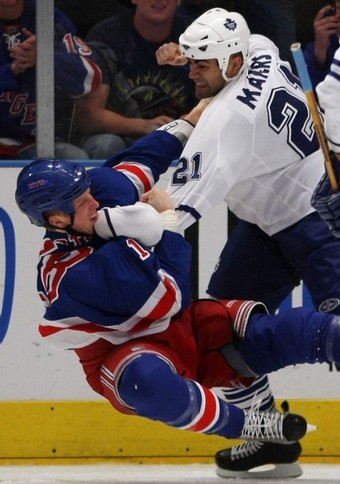 Let's hope that the Leafs score more than their last 0-0 meeting against the Rangers, even though both teams have enjoyed success on each other's ice in the past few seasons.

Backup Steve Valiquette will start for the Rangers. He's 2-0-0 with a 1.44 goals against average, and he's already posted a shutout victory over Toronto earlier this season.

We're boned. In case anyone forgot, Valiquette came in to the ACC last year and stopped 27 of 28 shots in a a 6-1 blowout. Thanks Raycroft. Hopefully tonight the Leafs continue their recent shot production, while rebounding from their soft defensive performance against the Rangers.

The Rangers have started the season 10-2-1, a win here would be a great morale booster for the Leafs, unfortunately I think Steve Valiquette is going to continue his role as "Leafs ruiner" tonight.