Game Recap: Leafs 5 Rangers 2 - The Best Hockey Game I Ever Watched In My Entire Life

Share All sharing options for: Game Recap: Leafs 5 Rangers 2 - The Best Hockey Game I Ever Watched In My Entire Life

Down 2-0 to the Rangers with under 10:00 in the third period, the Leafs decided to turn the last half of the third in to an absolute snipe show. Welcome home Valiquette, enjoy the pine on your next visit. 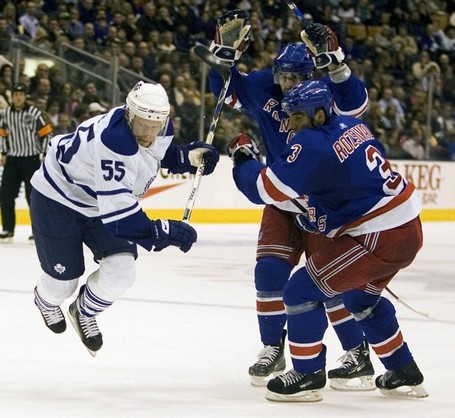 And that's all she wrote.

The Mongols under Genghis Khan rode their way to conquering vast swathes of the asian steppes. Not only could they ride like centaurs but they could fire their strong bows with remarkable accuracy at full gallop at ridiculous clips (one arrow per six seconds in one story I read). Facing them meant being able to face wave after wave of cavalry charges and machine gun-like arrows. These Maple Leafs appear determined to become hockey's equivalent to the Golden Horde.

I wathced the game on fast forward so I was able to compress my misgivings as the Rangers got an undeserved lead and stretched it to two on a lucky bounce. I watched the third period on normal speed and saw a player that never would have made the Leafs before turn the game on it's head. John Mitchell, the 23 year old that came into camp with three AHL seasons under his belt, pounced on yet another forced turnover, waited patiently, and fired a wrist shot in to break Steve Valiquette's voodoo over the Leafs. From there, in the words of Tom Renney, the trolley went off the tracks for the Rangers.

First, Blake made the most miniscule of deflections on a Dominic Moore shot to tie the game (FIST PUMP!!) and that was followed by Kubina's laser from the point after some good puck play. Then the hero of the night, John Mitchell, potted his second of the night on another good wrist shot. Last year Boyd Devereaux would have been getting those chances, and while he could have buried them, he would not be a 23 year old with the upside of John Mitchell. The hustle that he showed to create what should have been his third was remarkable as he flew past Marc Staal and beat Valiquette to the puck. A well-timed poke check put the puck on Moore's stick for a split second before becoming the fifth goal in a Leafsplosion of offence.

The Rangers, like the Bruins, the Ducks, and the Devils, eventually wilted under the relentless blue and white waves of attacks. It's still early in the season but I cannot imagine that too many teams are looking forward to playing these new-look Leafs.

The team had a huge night in the face-off circle as Moore won 80% of his draws and Matt Stajan won 57%. Mitchell was the star of the night with two goals, an assist and a + 3 rating while Blake was the yin to his yang with one goal and two assists. Drew Doughty also better watch his back as Luke Schenn picked up an assist and was +3 on the night.

Thanks to everybody who witnessed it with me, including Archimedies who is probably late to work.