Maple Leafs 3 at Flames 4: Too Cute By Half

Share All sharing options for: Maple Leafs 3 at Flames 4: Too Cute By Half 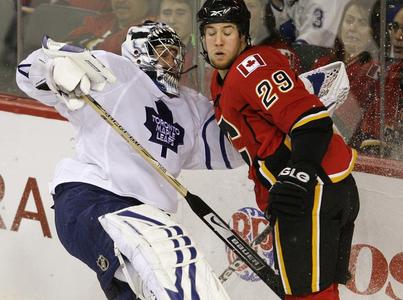 The expected crowd of blue and white faithful materialised but something was missing...oh yeah, effort. Not that the Leafs didn't play a decent gme and try right to the very end when they scored one of the top 10 weirdest goals I have ever seen (and hat's a good lesson in why you never want to have your centreman drawing the puck back towards your own net) but they lacked that certain je ne sais quoi that lead to a beatdown of the Habs.

The game started out well enough with a moving pre-game ceremony and chants of Go Leafs Go ringing around the Saddledome. The Leafs opened the scoring on a shot by Ponikarovsky that Kiprusoff mishandled. The Flames tied the game when Our Luke and Saviour decided to test the Leafs by misplaying a bouncing puck and not hitting Bertuzzi. He needed to have the team face adversity so he let that happen. That was not a mistake.

The game then got away from the Leafs. They were constantly manhandled down low and tried to use shot-blocking to hide the fact that they were not quite taking the extra strides needed to reach the puck carrier. This allowed Iginla to be all alone behind the defence on the second goal as Frogren came out to cut down the angle. Phaneuf's goal went in off of Kaberle's shin at the end of a sequence that resembled a penalty-kill so much that I had to rewind and ensure that the Leafs were not shorthanded.

But again the Leafs didn't give up and they pulled back to within one with just under a minute left. Unfortunately, no one told them that when you have the puck and are set-up in the offensive zone with the goalie pulled that someone has to shoot it. There was way too much passing on that last sequence for a team that fires the puck like it's their job most of the time.

This is going to sound weird but Ian White played pretty well last night. In fact, he's played pretty well every game. Nikolai Kulemin is where I thought Grabovski was about 5 or 6 games ago. He just needs one of his amazing speed bursts to result in a goal to get him rolling again but he's really looking like a player.

So it's another teachable game for Ron Wilson as the team heads to Edmonton. Please check out the rec'd fanpost to answer the questions posed to us by Oilers Nation and offer your suggestions for the questions to send them.

Thanks to everyone that popped by the basement for the game thread. MapleLeafs85 shows that the best way to overcome Blurr is to be in a hospital bed.