A Fireside Chat With Oilers Nation

Share All sharing options for: A Fireside Chat With Oilers Nation 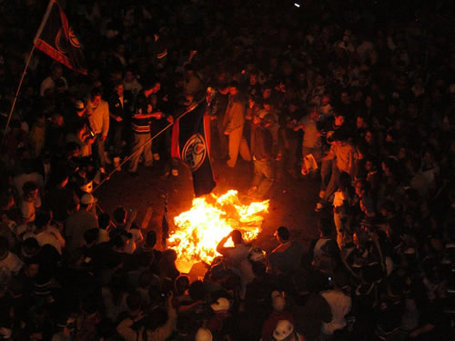 I first got to know Oilers fans during the 2006 Cinderella playoff run when fans converged on Whyte Avenue to celebrate victories and build fires to warm them during the long winter months of April, May, and June. They cheered themselves hoarse as their team teased them with the prospect of a return to long-ago glory days before falling at the might of the Hartoline Whalicanes.

In honour of the Leafs' first visit to Western Canada since that fateful season we set up an exchange of penetrating questions with Oilers Nation and Jean Shorts and Bagged Milk (PPP's Note: Bagged milk is the best thing in the world. I hate plastic containers. Take note USA) and their readers. Turns out that their readers can not only start a fire in the dead of winter but they can use the interwebs...who knew.

Chemmy's Note: I have no animosity towards the Oilers. Edmonton, San Jose, Calgary, Minnesota, when it's late I watch those four teams as background noise because I don't care what happens at all.

1. General Borshevsky: Do you hold out hope that NHL superstars will again one day want to play in northern Alberta, and not, say, somewhere nice and pleasant to live?

I Am The Law Says: I would consider Souray a 'superstar', moreso than Jeff Finger (I'm sorry, I really cannot rationalize that signing). Also, it seems that free agency is being slightly hobbled by GMs offering longer-range contracts to their young talents, thereby placing more importance on a farm system and scouting than on signing 'superstars'. So with any luck, this question will become moot. (PPP's Note: Hmm...this is starting out entirely too reasonably)

Wanye Gretz Says: Having hungout and attended games in 10 NHL cities I can assure you that Edmonton is one of the best barns in the league. Do we pretend that Edmonton in February is more comfortable than Florida? Hell no.

But there isn't an NHLer collecting a dime in any of the 30 markets that doesn't love being a big deal. You have 8 or maybe 9 seasons in the league and after that you are forever known as an ex-NHLer. Want to maximize those years in The Show? Want to score N*Sync level groupies? E-Town baby. (PPP's Note: I am guessing he means quantity over quality)

You are all we got, we pay buckets of dough and no one will ever hear what you do for a living in a bar and say "that's cute" and go looking for an actor or NHL player. Ask someone like Doug Weight what his favorite team was. For that matter, ask The Great One. The stars that matter will continue to play in E-Town.

2. 1967ers: Where do Oilers fans get off trash talking anyone? Your vaunted youthful speedy star-laden roster has one (count it) more point than the rebuilding doomed-for-last-place slow, no promising youth Leafs do.

As a follow-up, in what Bizarro universe is 1990 considered recent? Nobody under 30 has any vivid memories of the Oilers as a powerhouse.

Myr Says: The vaunted youthful speedy star-laden roster is better than a joke-of-a-contract-Jeff-Finger, AHL goalie duo team. Edmonton will improve, only a matter of time before the team clicks with newcomers Cole and Visnovsky. 1990 may not be that recent, but it's not a generation away, like how, oh, say 1967 is. (PPP's Note: Considering the first kids born after the Oilers last Cup are reaching voting age I'd say it's a long time. Then again, in forty years there might be 3 or 4 generations)

Wanye Gretz Says: Wow. Firstly Leaf fans asking Oiler fans where they get off chirping people is pretty much the dumbest thing I have ever heard (PPP's Note: You don't remember Kevin Lowe's comment about getting five assets for Pronger?). Check that, the dumbest thing I have ever heard is a team that last won in 1967 asking about recent memory. 1990 wasn't yesterday but there has been a Campbell Conference Final appearance AND a Stanley Cup appearance since then. You have to visit Palliative Care units to find people who remember the Leafs being anything better than terrible. (PPP's Note: Damien, is that you? I guess those four conference finals while the Oilers were fighting off bankruptcy and a disinterested fanbase really are just in our imagination.)

Better still we can chirp you folk because when the Oil heard that Jason Blake and Andrew Raycroft were available they said "pass." What did the Leafs do again? Exactly. We make good decisions out here in Alberta kids. (PPP's Note: Fans of the Anaheim Ducks thank you for your good decisions.)

3. jrwendelman: How did it feel when Chris Pronger and his wife basically hocked a loogie on the statue of Gretz out front of the Rexall Place/Skyreach Centre/Edmonton Coliseum/Northlands Coliseum? How did it feel when Roli the Goalie got steamrollered in Game 1 of the '06 Final, following which the Oil coughed up a three-goal lead and went on to lose the series in 7 games? That's gotta hurt.

Gord Says: Yes, it feels horrible making it to the Stanley Cup finals - I guess that's why the Leafs don't try to make it there themselves. (PPP's Note: Bingo. Better to get there and win than get there and lose)

Kai Says: It was like we were a newlywed couple and after having our first baby together, he took a good look at us with our stretch marks, extra 20 pounds and cold "you go feed the damn spawn of satan for once" stares and found himself some slut whose jugs would fall out of a turtleneck and left us to pick up the pieces of our shattered lives.

Wanye Gretz Says: Honestly dude it felt worse than a cobra enema. You guys couldn't understand what a Game 7 Cup Finals loss followed by you star leaving feels like. It feels bad.

The inevitable divorce Pronger will get will probably feel about the same level of crap. Much like when George Michael left Wham, we the fans move on.

4. PPP: Picking up Dwayne Roloson before the trade deadline in 2006 turned out to be one of Kevin Lowe's best moves as GM. It was one of his last good decisions before stepping down as GM (or screwing up upwards). Then the gamble on Mathieu Garon which worked out really well last year. Now JDD is apparently the second coming of Bill Ranford. What do you think Steve Tambellini is going to do to solve the overflowing crease?

Myr Says: I think (hope) that Tambellini is gonna trade off Roloson for a draft pick. He is, in my opinion, a strong backup-quality goalie. He's not consistent enough for number 1, although when he's on, he's phenomenal. Our minor league is filled with a ton of quality prospects. No superstars, sure, but lots of solid solid players.

Roloson isn't enough to get us back a quality prospect relative to what we currently have, so all we could hope for is either a mid draft pick, or a package for that third-line center the Oilers need. For Garon, JDD, and Dubnyk, I think he'll sign Garon for 2-3 years, however long he thinks it'll take for Dubnyk and JDD to be ready for the NHL, then give it over to those kids. They're huge, especially Dubnyk at 6′5″.

Rick Says: He is going to trade one to Toronto. It's just a matter of time before the Leafs GM of the moment outsmarts himself once again and decides the rebuild is over and all this team needs is Gary Roberts, at which time he promptly trades Toskala to get him, crowns Jospeh as the starter and then for some veteran experience ships a 1st rounder to Edmonton for Boulerice and Roloson.

5. Chemmy: Since I actually like the Oilers unlike some blogging partners I know my question isn't antagonistic - What is your favourite playoff series post-1990?

Bruce Says: 1997: Oilers take out Dallas on the strength of two Cujo shutouts in Dallas (one in double overtime) and his finest moment, a spectacular diving stop on Joe Nieuwendyk in OT in Game 7, setting the stage for Todd Marchant's flyby of Grant Ledyard and perfect shot past Andy Moog. (PPP's Note: That was my favourite too. I leaped about 5 feet in the air when Marchant fired that shot home.)

Reggie Says: The most memorable would have to be the '06 run. It brought the city back to life. It was amazing. How can you match the ups and downs of the playoff run or begin to describe the fans singing the national anthem (both US and Canadian ones).

Passion my friend, pure passion ! We were playing hockey in June and showing up to Rexall place in golf shorts, sandals, jerseys and drink beer to keep cool ! It was amazing!

BUCK75 Says: 1993 Campbell Conference Finals
It was great watching the Leafs blow the series after Wendel Clark scores a hat trick in game 6, then lose in overtime. Then to Watch Wayne Gretzky score a hat trick in game 7 topped of the misery of Leafs Nation. (PPP's Note: Ah the anti-Leaf presented with an opportunity to share his love for his team and some great memories of past playoff series chooses to pick one that doesn't include their team. Also, they show their lack of hockey knowledge by ignoring THAT IT WAS A HIGH STICK!!!!)