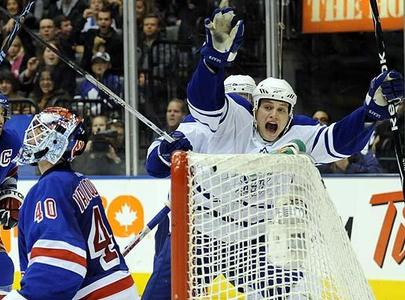 "I came out of the box and I didn't know if I had to change lines," Mitchell said. "I got no sign from the bench so I stayed out. The puck was bouncing all around like crazy and it came to me and I was happy that I got the shot in."

Then, he said, his mind went blank.

Seriously, what would you do if you grew up in Oakville and scored your first goal at the ACC for the Maple Leafs? Probably ask for another Mercedes but you'd also fist pump like crazy.

The Rangers, their fans, and the media seem completely stunned by the game. Actually, to be fair, I think we were all stunned too.

It's as if that power play completely broke their rhythm. John Mitchell went to the bin for holding. Then he broke the shutout. Then he stuck the dagger in. And then he almost completed the hat trick when Steve raced to of the crease.

How do you explain it? It's not as if I can point to this and say "Ahah! There's the disaster I've been predicting!"

As I mentioned in the recap last night, Mitchell is the kind of player that probably wouldn't have had a chance under previous administrations. Talk about an impact last night though, seven minutes of euphoria for Leafs fans and an entire night of confusion for Rangers fans.

For close to 53 minutes Steve Valiquette was pitching a shutout and the Rangers were playing their rope-a-dope style, defense at all costs game and then the house of cards collapsed. The culprits? The team and the clueless coaching staff.

Was this game symptomatic of a larger problem for the Rangers? Larry Brooks certainly thinks so:

They'd been living on the edge all season, so it's not all that surprising that the Rangers finally fell off. It is, however, shocking the way they melted under the tiniest bit of adversity late in the third period of a game they seemed destined to win.

The tiniest bit of adversity? I think that everyone watching the game could see that there was a lot of pressure on the Rangers throughout the game. The end result was, to say the least, surprising. So much so that even The Omen recognizes that they are surprising the league: