1967ers continues his excellent series "Leaf of the Day" with part two of his Wendel Clark post. Enjoy! - Chemmy

Wendel Clark responded very well to becoming captain of the Leafs.  Through his first two-plus games of the 1991-92 season, he had five goals and four assists and was leading the league in scoring.  Then disaster struck.  Continuing the pattern of the previous few seasons, there was a serious injury.  Clark went knee-on-knee with Ron Sutter of St. Louis and was gone for a month with MCL damage.  He came back, hurt it again within a week and was gone until New Years.

His return, though, was momentous for another reason.  On Jan 3, 1992, Wendel returned to action to a very different team than the one he had left.  That game also marked the debut of Doug Gilmour.  Both Clark and Gilmour would score that night, and this was really the beginning of a new era for the Leafs.  They'd make a late-season charge for a playoff spot, falling just short.  A week-long work stoppage killed their momentum and they lost the last couple of games they needed.  Wendel finished with 40 points in 43 games.

The team transformation continued in 1992-93 with a new coach in Pat Burns and a new sweater based on the 75th anniversary one they'd worn in 1991-92.  (I was at the Gardens for the unveiling of the new sweater, but that's a post unto itself.)  The '92-93 season was unlike anything Leafs fans had seen in decades.  Every move Fletcher made worked flawlessly, Burns had them playing a hard-hitting team game and Gilmour was lighting it up.

Wendel Clark continued to play his game, but the offensive results weren't really there.  He could change a game with a hit or a fight, but only had 17 goals and 39 points in 66 games, compared to 127 points for Gilmour.  There were calls during the season for the captaincy to be given to Gilmour instead.  Gilmour, for his part, downplayed that.  He said that his job was to put up points, while Wendel's was to be the leader, and there was no question that he was doing that.

In the playoffs, though, Clark came through.  10 goals and 10 assists and a plus-15 in 21 games, memorable bouts with Probert and McSorley, and game seven heroics in each series.  (As best as I can recall, in the four Game Sevens that the Leafs played between 1993 and 1994, Wendel had six goals and at least two assists.)  There were no more discussions about the captaincy.

1993-94 was the best statistical year of Clark's career.  46 goals in 64 games (on pace for 60) around the inevitable injuries and another trip to the semis (another 9 goals and 7 assists).

Burns and Fletcher met after the loss to Vancouver and agreed that the Leafs had gone as far as they could go given the roster they had.  On draft day, Cliff pulled off a shocker. 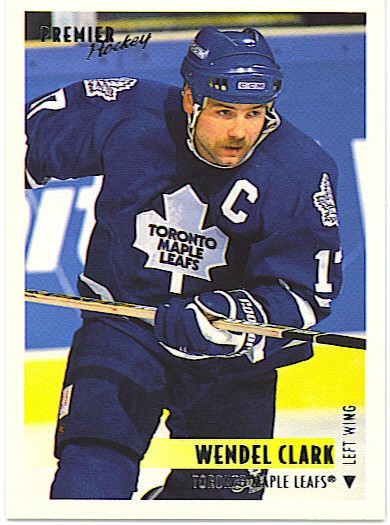 This is some mid-season action from 1993-94.  Wendel scores back-to-back hat tricks, part of a 10-goal-in-8-games binge after returning from injury:

This is the list of Wendel Clark's absences from the lineup due to injury, as recorded by hockeydraftcentral (beware of possible malware).

Clark's Back Woes: In his third NHL season, Clark began to deal with what would become crippling pain and spasms in his back. After missing 23 games with back problems from Nov. 9, 1987, to Jan. 2, 1988, Clark appeared ready to return to the lineup at the start of the new year. However, one month later, Clark re-aggravated his back injury at Philadelphia -- an injury that would keep him out of action for more than a year. Because he had played through his back problems, Clark managed to displace muscles in the back and twist his spine. Despite multiple efforts to return to the Leafs, Clark's muscle damage forced him to remain out of action for month after month. During his time on the sidelines, Clark became the target of criticism from contentious Maple Leafs owner Harold Ballard. In a Jan. 31, 1989, interview with the Toronto Star, Ballard suggested Clark was stalling his own recovery from the back injury out of sheer laziness. Ballard told the Star that "I sometimes think Wendel is swinging the lead. That would be a terrible thing to say if, indeed, he can't play. But I've never had a player let something disturb him for so long. I've had guys play for me with a broken wrist and a broken ankle. I think it's time Wendel tested the water." Although Clark had resumed skating in practice by this time, he declined to comment on Ballard's remarks and said he would not start playing in games again on anyone's timetable but his own. Finally, on March 1, 1989, Clark returned to the Maple Leafs lineup for a game at N.Y. Rangers. He had an assist in that game and went on to play very well over the remainder of the season -- scoring seven goals and adding 4 assists in only 15 games. Toronto, however, missed the final playoff berth in the Norris Division by four points. 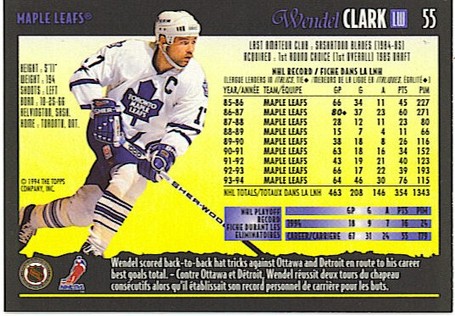