The Toronto Maple Leafs aren't waiting for Brian Burke to come in and start making moves, as the club traded defenceman Carlo Colaiacovo and forward Alex Steen to the St. Louis Blues for forward Lee Stempniak on Monday.

In Steen and Colaiacovo, the Leafs parted ways with two former draft picks that didn't live up to their first-round billing.

Who the hell is Lee Stempniak? Well, according to the Battle of Alberta's Terms of Battle and  courtesy of Chris DeGroat: 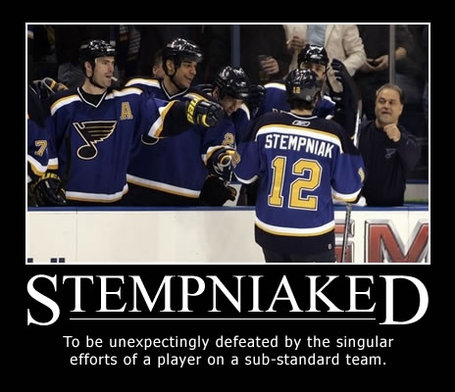 Undersized and not the fastest skater, Stempniak has always had a nose for the net. He plays the point on the power play fairly well and likes getting the puck in the high slot. What he will most be remembered for in St. Louis is being the first face of the franchise’s rebuidling effort along with Jay McClement. That’s probably why you see so many No. 12 sweaters around the Drinkscotch Center. That and he’s scrappy. St. Louis loves scrappy.

Assets
Owns excellent speed and quickness. Can play either wing position and displays plenty of scoring potential.
Flaws
Needs more refinement in his play without the puck. Is somewhat undersized, which may hinder his production in the long run.
Career potential
Top six winger.