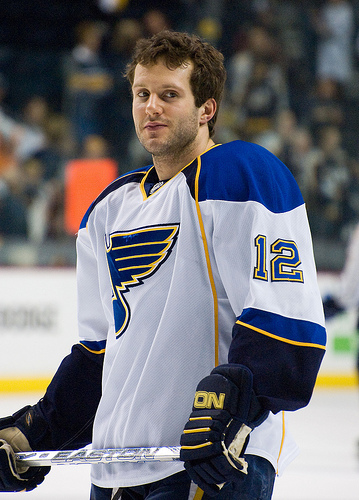 Welcome to Toronto, Lee. Click through the jump for some Stempniak info!

Stempniak exploded into the league in 2006, scoring 27 goals as a rookie. His second campaign saw him score half that total. He's a hard worker though, and I think this trade could be a wake up call to Stempniak. He's apparently humble too:

"You're Mr. Stempniak, right?" the attendant asked. "I played hockey with your son — your son Jay."

After a little small talk, the attendant said, "How is your son Lee doing?"

The beauty, of course, is that the attendant could have asked Lee himself considering the Blues winger stood a few feet away. Stempniak, always unassuming, said nothing. The rest of the dinner party looked at him and laughed.

"Lee was standing right there," said Matt English, who coached Stempniak for years and had dinner with him that night. "He didn't even recognize him. He's talking about his brother. I said, 'Gee, Lee, you're pretty popular around here.' But he's so humble."

Stempniak got off to a cold start this season, but has 12 points in his last 7 games. From the Two Line Pass:

St. Louis made the deal, I suspect, simply because it needed warm bodies to fill out the lineup every night. There’s no other reason to trade a player as good as Stempniak, who scored 27-25-52 two years ago and is playing at almost a point-a-game pace. The move also clears up about half a million in cap space for the Leafs.

Hopefully Stempniak can continue his current hot streak, and his sophomore season was just a fluke. If Stempniak regains his form (and with his current points streak it seems like he will), Toronto is getting a goal scorer.

Now, where to play him?