The Leafs are increasingly seeing some promising efforts derailed by Vesa Toskala. As much as he says that he's been feeling fine it's clear that something is wrong with the little goalie that Leaf fans had hoped might be one of a handful of attractive assets that could be moved at the trade deadline. At this rate, we might have to see if CSKA Moscow might be interested. So what should the Leafs do? Should they listen to Chemmy and irrationally blow up any potential to move Toskala? Or should they take a calm and measured approach? When is it time to turn the team over to Justin Pogge? Or do we hand the reins back to CuJo and try to recapture the magic of the Quinn years?

Well, having those questions answered is why they invented Even Stephven which we will now rip-off. 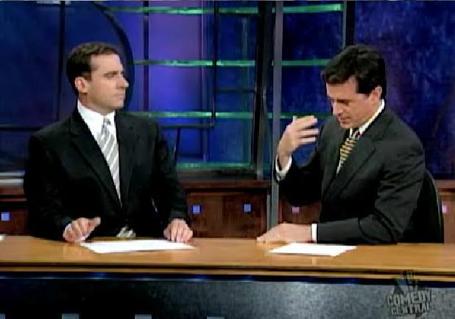 The Mensa chapter president PPP tries his best to convince the Forrest Gump-like Chemmy that he shouldn't panic...or eat worms.

(p.s. Chemmy tried to change the above caption to make me the dumb one but then let me finish editing the post again. I'll let you draw your own conclusions on that one)

Here's Andrew Raycroft's stat line from 06-07 when we all agreed he needed to be fired into the sun:

We literally wanted someone to set Andrew Raycroft on fire and run him out of town. We wanted to see Raycroft tarred and feathered for his poor play, and Vesa Toskala is substantially worse this year. This isn't a short slump, Toskala has been awful for 18 games. He ranks 39th in the NHL in GAA, and 42nd in SV%.

Granted, some of it is the fault of the defense. We've seen a neverending streak of goals go in off of our defensemen's legs and sticks. That said, an 0.876SV% isn't pretty no matter how it happens, and 41 other goals in the NHL can manage better.

There's one small difference in those two stat lines. Maybe someone that can count past the number of fingers and toes that they possess (ask Chemmy about Chinese Finger Traps) would have noticed that Raycroft picked up those numbers over the course of 72 games rather than just a scant 18 starts.

Actually, that's a little disingenuous of me. Chemmy's not asking us to believe that Toskala will actually be that bad over the course of the season. What he is asking us to do is the equivalent of taking cash out of our pockets and burning it while simultaneously giving our broker the rest of our savings to invest. Let me clarify that analogy.

Toskala, our goaltending assets or "cash", has suffered a rough first quarter of the season. A closer look at VeTo's stat line shows 411 saves on 469 shots for a horrible .876 Sv%. What would it take to get Toskala back up to last year's .904 which, while not great, was enough to convince us that he could be flipped at the deadline for worthwhile assets? 13 extra saves. That's .722 more saves per game. Thanks to Ron Wilson's defensive focus on blocking shots every goal  makes a much bigger impact on save percentage. You could probably find at least one goal a game that was in no way Toskala's fault.

We don't need to throw Pogge to the wolves but giving him three or four starts sprinkled through the season with Cujo as his backup lets Hirsch work with Toskala for extended periods. Giving Pogge a start tells him that the organization is serious about its goaltending prospect, but that he needs to shine.

Hopefully a good Pogge start also lights a fire under Toskala's "rear end". Toskala played well platooning with Nabokov in San Jose, and he played well with the threat of Raycroft constantly snoozing on the bench. Toskala has played abyssmally as the undisputed number 1.

Give Pogge five games this season, what's the harm?

Let's go back to the second part of my previous analogy that I left dangling in the wind in the hopes that Chemmy would blindly stumble into my trap. That would be putting Pogge, the rest of our goaltending assets (dear Brian, draft a goalie) or "cash", into the frying pan during a rebuilding year. It's essentially a no-win situation. Not only is there the risk of destroying Toskala as an asset (moreso than his poor play) or that Pogge will get shelled and lose confidence (though it hasn't killed Schenn yet) but it goes against what Ron Wilson is instilling in his team: accountability.

Justin Pogge is well aware of the opportunity that awaits him. He showed that he was close to ready in the preseason but what has he done in the AHL? 2.71 GAA and .901 Sv%. Sounds good right? Well, it ranks him 19th on the top goalies list. Maybe those numbers are depressed because the Marlies are in the NHL but the top goalies in the league have significantly better stats. He's also only played 41 and 48 games in his previous two seasons. Are the Marlies that bad anyway? Last year they made it to the Conference Final (ie were brutal in mediaspeak) and while there have been changes the core of the team is still intact and has been bolstered by Bell and Devereaux.

Let Pogge play a full professional season as a starter and show he's earned it before throwing him into the middle of a rebuild.

Have you even looked at Toskala's weak spots?

Actually, JavaGeek at Hockey Numbers was kind enough to give me a breakdown of VeTo's save percentages per area through 18 games.

I know. It's almost like CuJo needs to play while VeTo gets some time to practice on his Raycroft-like glove hand. 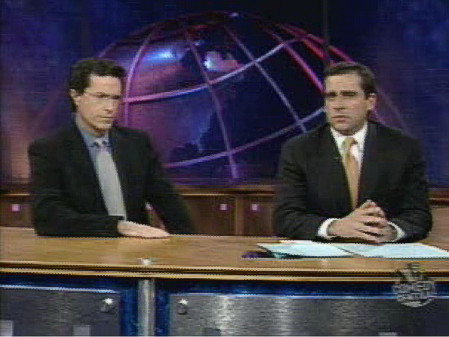 And that's been another installment of  Even PPP/Chemmy.