Share All sharing options for: NNN: Burke Walks On Water 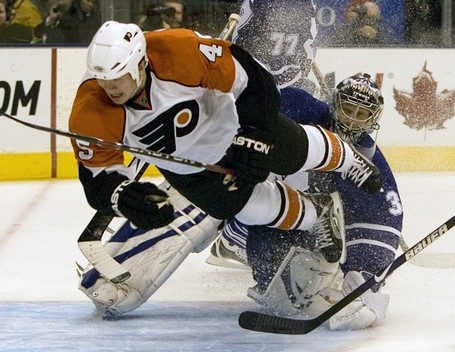 I am still not entirely sure how this was a goal while every time the Leafs looked at Carey Price crooked they got two minutes. Ah well, 4-2 bitches! Anyway, here's what the dying medium had to say about the game:

Burke, realizing the team has been inundated with speculation about what he might do with the roster, visited the dressing room prior to the game for a quick introduction to the players and a much-needed message to the Leafs.

"(Burke) said, 'Don't try to do to much because I'm here,' " said Leafs goalie Vesa Toskala, who was stellar for a second consecutive game.

Is that all that they had to say? Of course, the hidden message was "do more or play in Phoenix". And how about that Vesa Toskala! Ron Wilson thinks that he figured out the problem and it should settle the debate about whether he was playing too deep or too far out:

"Kudos to him for finding his game and getting it back."

Considering the story in this morning's FTB about how Burke has dressed down some particularly bad reporters the media in Toronto must be walking on eggshells. It probably doesn't help that Coach Ronny is quick with a barbed tongue too:

"I think Brian did a good job to relax them," Toronto coach Ron Wilson said. "I hate to be blunt, but you [reporters] have been asking them dumb questions, like if they think they are going to be traded.

"Brian assured them that wasn't going to happen. That was one of the best things he could have done. He told them to relax and play their game."

Kevin McGran distinguished himself by asking Burke if he thought that the moves to get Schenn and Grabovski were good ones. The Leafs dynamic duo will be in cruel quip overload before long.

Toronto's Nik Antropov scored his club's second goal when he was hit on the chin by a clearing attempt from Philadelphia goalie Martin Biron early in the second period.

p.s. that Kaberle character is tradeable enough for both of them.

Flyers center Mike Richards admits to getting a little extra incentive when playing on Hockey Night in Canada.

So it wasn't surprising that the team captain scored two goals - one shorthanded - and played one of his strongest games of the season last night in front of 19,387 fans at the Air Canada Centre and a nationally televised audience in his homeland.

That is the kind of thing that the Leafs' face in every home game and on every Saturday night. It's like the Patriots having to always play an opponent that is giving their best effort. Some times it can be too much. Not Saturday though as the Leafs' 13th general manager began his quest for immortality.