Share All sharing options for: Game Recap: Hurricanes at Leafs 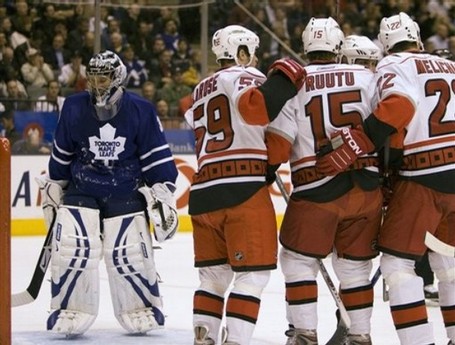 Toronto looked sloppy in the first period, giving up four goals. A lot of hard work by Hagman (1G 1A) and Grabovski (2G 1A) and a shot by Van Ryn tied it up and got the Leafs a single point they probably didn't deserve.

Good to see them come back from 4-1 to tie the game at 4 and send it to OT but Toronto really needs to settle down and not put themselves in this position over and over again.

Holy crap. Did you guys know that you can embed the game in six minutes from the Leafs' site? Well, now you know so there it is. I actually missed the first period so this game in six minutes is probably the greatest thing since sliced bread. I guess it really sucked to have to rip bread with your hands.

Anyway, from the quick highlights that first goal came off an absolutely horrific turnover by Alex Steen. There are only a few hard and fast rules in hockey; no hitting from behind, always defend a teammate unless it's Wendel kicking his ass, never clarify numbers for the ref, and always go top glove to show up the goalie, but another is that you just don't turn the puck over at the blueline. It's a recipe for disaster. Oh, and Poni, that means your own blueline too especially with just over a minute left in the period.

There are some rumblings about the goaltending of late and the Canes' third goal definitely won't help. What the hell was Toskala doing? It's not some foreign sheet of ice. How do you not know that the ACC's dasher is lively?

On the bright side, I think that we can officially call the Man Grabs Lemon (Koopa Kid?) line one of the Leafs' most exciting in years, certainly in my memory. The first goal of the game was a lesson in quick strike offence. They also managed to add a powerplay goal in the second that highlighted their passing ability and the fourth showed that Fletcher fleeced Gainey. Just ripped him off.

Other players impressing me are John Mitchell (the goals gave him a huge confidence boost and he looks like Antropov with the way he protects the puck and uses his reach), Mike Van Ryn (speaking of fleecing trading partners...) and Luke Schenn (who looks a little tired but still played a pretty good game).

The turning point of the game was obviously when the Leafs decided that they had spotted the Hurricanes a big enough lead and it was now time to start playing hockey. I'd kill to hear what Wilson is saying after the first period but I don't know if my ears can handle it. Actually, the failed 5 on 3 killed the Leafs and pretty much sealed the result. Once it went to overtime, in Toronto, against Carolina, you just knew that it was bad news for the Leafs. But, it's another point and another "never say die" performance. Now maybe the Leafs can put together some "die opposition die" performances together.

Funny Note: Here is Puck Daddy's preview of the game:

Preview: Carolina Hurricanes at Toronto Maple Leafs (7:30 p.m. EST; TV: TSN). It's Ian White's turn to take a spin in the lineup, as Ron Wilson keeps making things interesting game to game for the Leafs. Scott Walker is back in the lineup for the Canes. Oh, and Pension Plan Puppets is both getting traction for its war against the MSM and getting flack for disparaging Southern hockey markets.

Thanks to everyone that came out and congrats Jared and his hot-dog scented hands for winning the spam crown!