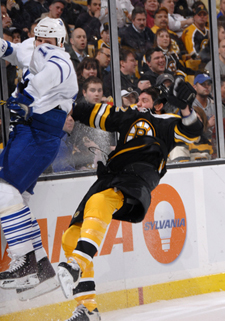 The Leafs make their second trip of the season to Boston to face a team that could put a meth addict with ADD into a stupor and a fanbase that is disproportionately arrogant. I guess we're in for a treat as the super talented Bruins will no doubt abandon their five man shell defensive stylings in order to showcase their offensive skills by skating past their own hashmarks.

Apparently Bruins fans are starting an online campaign to get Tim Thomas voted to the All-Star game. It's a shame that they offer no thanks to my good friend who launched Thomas' resurgence. Two seasons ago, as we prepared to watch the first in about 15 matchups in 3 weeks between the two teams, he turned to me and said "You know, I feel really confident tonight. Thomas has a brutal glove hand and was playing in Finland...FINLAND! before this. I saw him there and he sucked." Little did we know that Tiny Tim could hear him and was determined to prove him wrong. Anyway, very early in the season Tiny Tim is a decent candidate (great Sv%, sub-2 GAA) so good for him.

It doesn't look like there are any lineup changes from Tuesday for the Leafs. The Hockey Viking is free! Frogren is in for Stralman to provide more sandpaper. Hopefully this will be the game where they realize that while stirring comebacks are fun winning games from the outset is more enjoyable. Vesa Toskala will look to rebound from a shaky start on Tuesday while Luke Schenn continues his quest for his first NHL goal.

The fourth line will comprise Mayers-Moore-Blake again while the Man Grabs Lemon and Soviet Bloc lines continue unchanged. What does that leave? Steen-Mitchell-White? Hmmm. I'd rather see Stajan on that line but c'est la vie.

"If you look at the whole league right now, they're probably the hardest working team in the league. Just by establishing that, they've made themselves a really hard team to play against. I'm sure a lot of teams used to go into games against them thinking: 'It's going to be an easy night here.' But even when they're down two or three goals, they're still pushing and plugging away, grinding their way back."

Oh, as a final note, Bruins fan Evan50 has no respect for Canada's military:

Maple Leafs Trivia
There are many theories about the origin of the Maple Leafs name. One theory according to the always reliable Wikipedia is "The Maple Leafs say that the name was chosen in honour of the Maple Leaf Regiment from World War I. As the regiment is a proper noun, its plural is formed by adding a simple 's' creating Maple Leafs (not *Maple Leaves)." Nice try, but you're still not invited to the grammar rodeo.

At least he remembered the 'u' in noun.