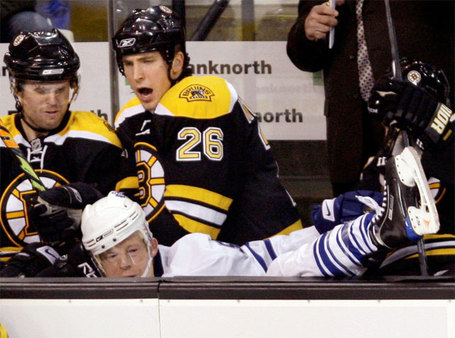 Boston learned their lesson from last week and skated with the Leafs all the way through this one. The Leafs had another rough first period, giving up a pair of goals, and gave up another one in the second to put themselves down 3-0.

Steener had a pretty goal in the third, doing a spinorama to catch a pass, putting a shot on, and circling the net in time to put in his own rebound. Mikhail Grabovski deked Thomas out of his pants to score another, but in the end it was all for naught.

On top of losing two points in the standings, the Leafs lost two players who have gotten a few points lately. Nik Antropov blocked a shot with his foot, x-rays negative, and John Mitchell collided with the boards awkwardly, hurting his shoulder.