NNN: Settling into a Pattern

Share All sharing options for: NNN: Settling into a Pattern 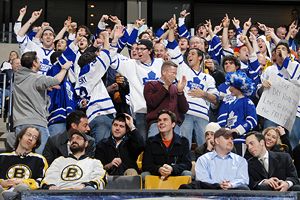 That in no way resembled how the game went for the Leafs last night. After putting forth one of their worst efforts last night the Leafs had a 5-on-3 to get back to within one but they blew it. Don't get me started on Poni's stupid penalties or the ref's stupid call on Antro - since when is it a penalty to have your opponent clamp his arm on your stick? In my opinion, that is cheating just as much as diving - which helped dig the Leafs a big hole...again. It's starting to look like we're getting on track for the kind of season that we were all anticipating.

Of course, the big story of the night was Blake Wheeler. Wearing new digits (#26, instead of the #42) he pumped in 3 goals to double his season total and tie Mikhail Grabovski for the rookie lead. Oddly, Grabovski scored one of his own to keep pace.

As soon as I saw that Wheeler was ditching the Coyotes I wanted the Leafs to sign him. Getting Grabovski helped ease some of the pain but Wheeler definitely looks like a kid that has the tools but just needs some direction. But on the topic of Grabovski:

For everyone that is ready to hand over the Vezina Trophy to Tim Thomas, please go back and take a look at the Mikhail Grabovski goal. Thomas is tearing it up right now, but if there is anything that we know about Timmy, it is that he is very streaky. I wouldn't expect him to keep this up all season.

Grabs reacted coolly to Thomas' ridiculously bad attempt to cut off the puck. He's in a rich vein of form as the Brits would say and is showing that the confidence of being a top line forward sits well with him. Kulemin was an early pick for possible break out year but his fellow Russian seems determined to take the mantle from him. Funny that Evan touches on people jumping to ridiculous conclusions...

Mitchell will be further evaluated in Toronto today but it is likely that his absence will be measured in weeks.

The loss of Mitchell may increase the urgency of general manager Cliff Fletcher to move one of his excess defencemen for help at forward.

Going back to Tex's ponderings about whether Leaf fans would lose sight of this season's goals it's nice to see that the local media has already beaten even the most optimistic of fans to the punch. Suggesting that the Leafs should deal from a position of weakness to fill a non-existent gap rather than calling up a Marlie (which they have already done with Tlusty) is about as ridiculous as sportswriting gets in this city. Already the team's devotion to not making rash decisions or wasting assets has been forgotten by Mr. Hunter.

The good news from the game? Antropov will be ready to go on Saturday and Steener picked up a much needed goal. The bad news? The Leafs play the Habs who beat them 6-1 in this year's only meeting.