Share All sharing options for: Game Preview: Habs at Leafs 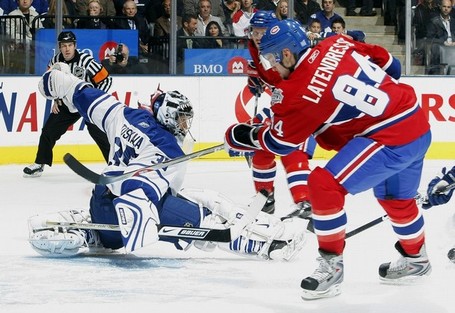 Montreal played last night Columbus and lost in a shootout. Toronto last played Thursday night in Boston, where they did their characteristic "terrible first period try and come back in the third" dance.

Toronto is 0-2-1 in their last three, having played Carolina twice and then the Bruins. Tonight they're back in the ACC on a Saturday night against Montreal, here's hoping they put up a good effort.

Nik Antropov is expected back in the lineup tonight, after taking a shot off his left foot in the 5-2 loss to Boston. John Mitchell is expected to be out for a week, so Jiri Tlusty was recalled from the Marlies to take his spot.