FTB - The Habs Love Hitting From Behind

Share All sharing options for: FTB - The Habs Love Hitting From Behind 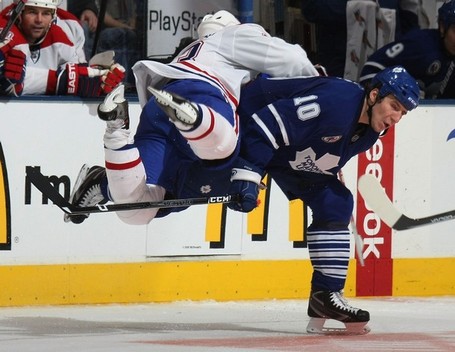 Van Ryn was rammed into the end boards from behind by Kostopoulos early in the first period. Van Ryn went to the ice and later to the hospital, with what the club said was a broken hand, broken nose, concussion and cut face.

Say what you want about Hollweg being an asshole (he is), but Hollweg hasn't put anyone in the hospital with a broken hand, broken nose, cut face, and a concussion this season. Andrei Markov picking up a boarding call in the next period, and Kostitsyn's charge + game misconduct in the third make the Canadiens look like a team struggling under the weight of expectations.

Good to see Grabs pick up a beauty of a goal against the Habs. On to the links:

Thanks to everyone that came out to the Game Thread. Loser Domi retains her crown. Bow down to the Queen.