NNN: The Habs Are a Filthy Team

Share All sharing options for: NNN: The Habs Are a Filthy Team

Here's video of the hit last night by Tom Kostopolous on Mike Van Ryn. A more proper term would be assault because at no point in that play does Kostopolous do anything else than try to injure Van Ryn. Now a guy that was making Fletcher look great for offloading McCabe and replacing him with a younger and more defensively sound version is out for at least a month. Here's is that scumsucker Kostopolous' empty excuse:

Sorry you asshat, the video proves that nothing of what you said is true. Throw in Koivu's attempted knee to Grabovski's head, Kostitsyn's attempt to injure Schenn when it was clear that he was going to lose a race to prevent icing, Alex Tanguay's unpunished slew foot on Luke Schenn, Robert Lang's vicious two-hander to Grabovski's wrist, and Guy Carbonneau's Hallowe'en tie and I haven't seen such a disgraceful display from a group of people from Montreal since last spring's riots. I wonder what Al Capone thinks of last night's game: 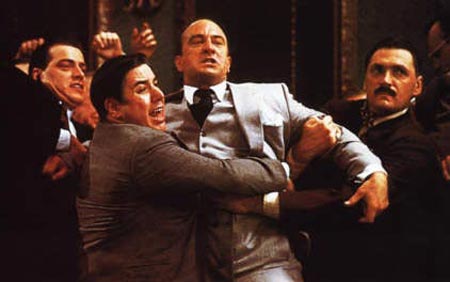 Wow, that guy is unhinged. Maybe I shouldn't have given him their home addresses. Obviously I don't advocate trying to injure someone but if Frogren happens to catch Koivu with his head down and happens to knock him the f**k out or Jamal Mayers drops the gloves and tries to give him a third eye socket or Mark Bell gets called up to catch Kostitsyn (whichever douchebag it was) admiring a pass and leaves him seeing birdies or Ryan Hollweg happens to see Tanguay cutting across the middle and makes him forget how to speak English or Carlo Colaicovo happens to lay a perfect hip check that makes Robert Lang land on his head then I would be okay with those outcomes. Clean and devastating is the kind of revenge that I want to see.

What the fuck was that?
Hamr doesn't play and the whole thing falls apart?
We suck.

I'll tell you what it was. It was a disgraceful display of dirty hockey. The man of the night was Mikhail Grabovski. Did you know that he still counts as a rookie? Yeah, I had to check too but here is proof. Add in the Van Ryn deal and The Silver Fox is back to stalking his fellow GMs for sport. back to Grabovski though:

Grabovski speaks some English but last night, with a crush of media in front of his stall, it was up to teammate Alexei Ponikarovsky to translate when reporters asked what Koivu told Grabovski.

"He (Koivu) gave him some special advice," said Ponikarovsky, getting a laugh. "He told him it would help him in the future. He (Grabovski) just listened to his advice because he respects him."

My special advice to Koivu would be that he not squander all of his built up goodwill trying to injure former teammates. Especially considering that Mikhail actually speaks highly of him:

"(Grabovski) respects Koivu and he's the only guy in the Montreal room he respect. He  thinks Koivu is a super special guy and hockey player. He just doesn't pay attention to  the rest of them."

As if embarrassing Andrei Markov (who I saw was leading some random poll about the best player in the NHL - laughable) on the first goal wasn't enough he tosses out interview gems like that one. Some people took a look at the matchup between old rivals with a new point of view:

It was when the teams were playing with equal numbers of skaters, however, that the Leafs were dominant. Perhaps it had something to do with the fact Toronto was particularly motivated, having lost three in a row with a three-game Western Canadian road trip coming up, or because the Habs had played extra time in losing a shootout in Columbus the night before.

I say new because anyone that's watched any of the games in, oh I don't know, the last 15 years knows that for the most part at even strength the Leafs, regardless of skill, have dominated the Canadiens. The post-lockout mark may be tied at 13 wins apiece but Montreal's special teams have saved them more often than not. It almost worked last night as it became a penalty to chase a rebound or breath on Jim Carey Price. In the end though, the Leafs managed to leave Montrealers impressed with their commitment and effort:

Last night, the Maple Leafs dealt the Canadiens a lesson in focus, intensity, and hard work. You could also add humility to the growing list.

The Canadiens approached last night's game as though it had already been won on paper.

But why on God's earth would the Habs think they were in for an easy night against Toronto. The Leafs have beaten the Red Wings, Bruins, Senators, Devils, Rangers, and now the Canadiens so far this term - not a sad sack team in the lot. Coach Ron Wilson is the big difference maker. He has his team poised every game, and playing with a do or die edge.

Robert L - Eyes on the Prize

And back to Grabovski one last time (emphasis mine):

On the talent front it was interesting to see the team that the Leafs put out. This is a team of relative no-names, but still there is more talent than meets the eye. Of all the players, however, the one that impressed me the most was one that was impressing me all of last year - Mikhail Grabovski. Apparently we had no room for this explosive talent on our team, a team that I remind you is carrying Latendresse, Kostopoulos, Laraque, Dandenault and Begin, and Toronto basically knew it and ripped us off. I understand that you can't keep all players forever and that sometimes some good ones get away, but come on, how obvious was this? Grabo excelled for us and Hamilton last year and I believe was worth holding on to. It may be too early to tell if he will spend his career as a Hab-killer, as so many ex-Habs have done in the past, but he hurt us tonight and for me that is enough to make me pay a little more attention.

I think that Habs fans will be hearing about that trade for years.