Here at Pension Plan Puppets Incorporated we realize that the quality of the site depends as much on the people that contribute comments, fanposts, fanshots, and general hilarity and insight as it does on the combined awesomeness of Chemmy and I seen here: 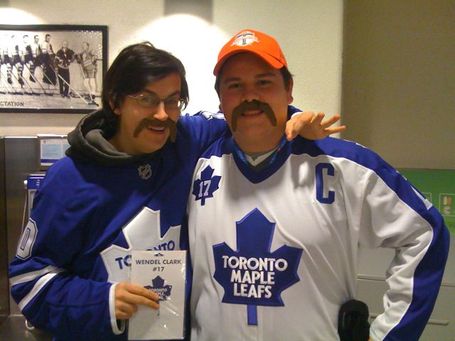 That's why we set a 6th straight record for visits and page views in November. Chemmy and I want to continue making this the best site possible so we wanted to figure out a way to thank the current community and encourage lurkers and newcomers to join in the fun (please read this first). So we've pulled together a great batch of giveaways that'll be given out in a few ways, some still to be determined, but here are the details for the main contest:

Step One: Register. If you're already registered then the easy part is over.

Step Two: Make 20 comments in the month of December. Make 'em count through either sheer hilarity or brilliant insight because posting "First" 20 times will not count and will likely result in me sending someone to your front door like the ending of Jay and Silent Bob.

Step Three: Write two fanposts in the month of December. This part might seem daunting but we'll post four themes (one every Monday) to try to inspire you to greatness. Before putting yours together give this piece by Al Yellon of Bleed Cubbie Blue a read. Make sure to label the fanposts "Christmas Contest" so that we can easily find them.

This week's theme: Festivus! Write a post Airing Grievances with a certain player/GM/Coach/mittenstringer or about what Feats of Strength you want to see a player/GM/coach perform.

Grand Prize: Chemmy will present some art-house pictures of this but thanks to his diligent quest for cheap jerseys the top prize will be a Mats Sundin Jersey! It's a CCM Mats Sundin replica jersey. You can own a jersey of the greatest Leaf in the team's history just by commenting!

Second Place: Thanks to an extensive network of superb agents I was able to procure not only a Wendel Clark bobblehead doll from his banner raising night but also one of the stylish moustaches that Chemmy and I are modelling in the picture above. I know, I am freaking awesome.

As I mentioned, there are a few other prizes and presentations that we'll make throughout the month for exceptional Fanposts and good comments so spread the word!

Legal mumbo jumbo blahblahblah the skill testing question is going to be awesome.