Share All sharing options for: Game Preview: Leafs vs. Kings 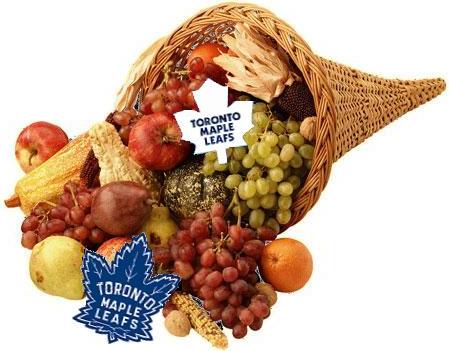 The (American) Thanksgiving horn 'o' plenty keeps on giving for your friend Greener this week, and I keep on thanks-ing. This deliciously laden cornucopia brought to you by a peaceful, loving Universe, and the lawyers running the NHL who've finally realized that human beings west of, say, Buffalo actually want to see the Leafs more than once a decade.

The Kings are a surprisingly talented bunch whose perpetual placement in the standings belies the fact that they are a good, entertaining hockey team. Kind of like the Leafs of the last say, 12 years.

One main cause for concern for the Kings always seems to be in net. They either keep them too long: OMGDan Cloutier, or not long enough: Mathieu Garon, Cristobal Huet. I'm reading that the starter tonight will be #1 Jason Labarbera, which is good news. Labarbera has looked shaky in every game I've seen him in this year, and his rebound control is Raycroftian. He's beatable by shelling him with shots, and going hard to the net looking for rebounds. This is an obvious thing to say Labarbera or not, as the Leafs should be doing that every goddamn game no matter who they face.

Look for guys like Dustin "If It Lives I Hit It" Brown, and eventual-runner up-to-Luke Schenn-for the Calder- Drew Doughty. They, and guys like Alex Frolov and Patrick O'Sullivan are good, and if Toronto have a lead, Ron Wilson has to keep the Leafs interested because the Kings have the ability to come alive and pull themselves out of a hole.

The Leafs are riding a crest right now due to the Burke signing, and the confidence instilled by Vesa Toskala doing his usual quarter poll turn to being a great goalie. With him playing like he has the past few games, listen for the sound of thousands of car horns honking on Olympic Avenue, mine included.

ALSO: Here's a fun game. Drink an entire beer for every  "Mats Sundin in the skybox" shot they show! You'll be drunk by the first intermission!