A strong defensive effort from the Maple Leafs was rewarded with a win in the shootout on Jason Blake's amazing spinerama. 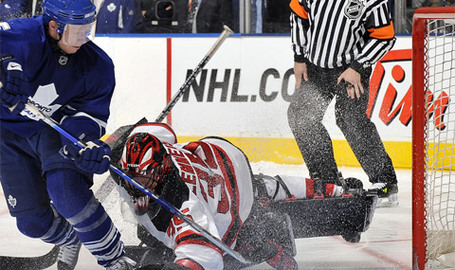 The Leafs put on a shot-blocking clinic as the players made almost as many saves as Vesa Toskala. Jeff Finger led the way with eight blocked shots while Pavel Kubina and Mikhail Grabovski added four a piece. The latter is great to see as Grabbo's scoring pace has slowed down over the last few games.

Hagman's injury has cause a shake-up in the lines but out of the rubble has emerged the new Beamer Line of Blake-Moore-Williams. Tonight they put the Leafs up 2-1 as Williams potted his third score in consecutive games on a hard wrister that got between Clemmensen's catching arm and his body. They then scored on back-to-back shots in the shootout to give the Leafs a rare (but not a statistically significant amount) victory in Bettman's gimmick.

In seven of their last nine games the Leafs have kept the opposition to two goals or fewer. Their record in those six games (because they obviously lost the two where they gave up more): 5-1-1.  Not surprisingly, the good record has come about just as the Leafs have married their Wilson-imposed discipline (least penalized team in the league) to the revamped penalty with a touch of timely goaltending (to say the least). It looks like maybe Wilson' defensive systems are catching on with the team.

Antropov answered my call for a better performance. He was a force of nature on most shifts and used his reach to pot the Leafs' first goal. Matty Stajan and Nikolai Kulemin filled out an impressive top line. Kulemin especially continued his strong work off the puck and used his strength on the forecheck very well. The Vesa made a ridiculous save with tenths of a second left in overtime as the Devils got a breakway from their own blueline after the Leafs butchered a four on two. All in all, it was exactly the kind of game that Ron Wilson promised us when he arrived.

Of course, the mittenstringers are getting excited. They can almost smell the articles that they are going to write exhorting the Leafs to go for the playoffs. Working Class Howard jumped the gun tonight by asking if (to paraphrase) "being .500 29 games into the season is a surprise and whether that might make Burke take a short-term outlook". Ron Wilson barely suppressed a laugh as he pointed out that .500 is the level of mediocrity and he doesn't think that that is anything to get excited about.

Blake's shootout winner. There were not nearly enough fist pumps after this goal.