Share All sharing options for: (Not so) Negative Nancy: Taking a 180 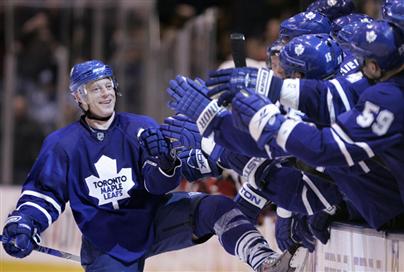 I don't want to call anyone out, but a certain someone around here heads for a beach holiday and the Leafs win three in a row. Coincidence? Hmm...

But seeing as this is Negative Nancy, I suppose we need to turn away from the positives to search out the black cloud in every silver lining.

Maybe it's the holiday spirit, maybe it's the Ghost of Jason Blake Past or maybe the Leafs PR department spiked the eggnog in the pressbox but there's not a lot of post-game negative ink out there. From the Toronto Sun:

Leafs players donated their personal tickets for last night's game against the Devils to three children's charities for underprivileged kids: the Peel Children's Aid Foundation, Make-a-Wish Toronto and Sick Kids Hospital Foundation. The children also got to meet and greet the players following the game. In addition, rookie defenceman Luke Schenn signed cookbooks outside of Centre Sports at Air Canada Centre before the game.

Let's see what others thought of last night's shoot-out match after the jump...

The Canadian Press wasn't too impressed with the flow of the game:

The three periods of regulation were like a flashback to what the NHL was like before the 2004-05 lockout. It featured very few scoring chances because neither team was able to use its speed and generate rushes.

This was a theme picked up by the Toronto Star:

The shootout lent an aura of excitement to an otherwise dreary game...It’s rarely a good idea to let the opposition score first. The Maple Leafs ought to know that by now. Unfortunately, they’re experts at falling behind 1-0 early, especially in the first two minutes of the game.

For the fans who paid good money to attend the game, it’s even more depressing to fall behind 1-0 to the Devils. That’s because if there was ever going to be any speed, any action, any excitement, it simply gets drained when the Devils get themselves a 1-0 lead on the road.

They play that defensive, neutral-zone trap game – there ought to be a law against it really – that slowed down the game.

That was the dull-as-dishwater picture after Rupp scored at 1:49

And the Hamilton Spec's Steve Milton piles on too:

This one was boring right until a back-and-forth overtime frame. It seems that reducing the number of players, and therefore the checkers, on the ice is the only way to offset the brutal boredom which the Devils inflict upon NHL audiences, when they're playing just the way they want to, which they did most of last night.

Milton also adds this bizarre observation to his post-game coverage:

There was a certain electric vibe in the building when Williams -- chosen because he played last year with Clemmensen -- lined up for his shot. In the blue-and-white land where becoming a legend doesn't require much, he's quickly acquiring a certain cult status: as the guy who can only score.

Yes, in the land of blue and white becoming a legend doesn't require much. Perhaps Mr. Milton from the Spectator can let Mats Sundin in on the secret so he too can bask in the electric vibe the ACC reserves for the likes of Jeremy Williams.

In his newser, Wilson mentioned that the Blake spinnerama move drives Cujo nuts in practice.  Fire and Ice notes that Clemensen's not a fan either:

Now to Blake's shootout winner. Devils goaltender Scott Clemmensen wasn't crazy about it, but conceded that it''s been become an accepted move in the NHL.  He said that Blake did make contact with him before he scored.

"When you come in ,you back in," Clemmensen said. "You can't see that he's doing it. You inadvertently do it when you're going to pull a move like that. But It's a legal goal."

"It's not for me to determine," Clemmensen said. "As a goalie, I would like to say, 'no'. But the league has set the precendent that it is legal and that's it."

Clemmensen was unsure if Blake came to a stop, but that wasn't his biggest issue with the play.

"I don't think that's so much the case," he said. "I think the case is more of the puck moving forward and backward and then forward again. That's the whole issue there. And then maybe inadvertent contact with the goalie. Obviously, he didn't mean to. But when you turn your back like that it's going to happen."

Devils Blog Interchangeable Parts live blogged the game and had some beauty comments like this one:

12:34 As if on cue after we comment aloud on how characteristically crappy the Devils have been looking in this period, Antropov is able to cash in on a shitty rebound and even worse defensive-zone coverage. 1-1 game. It should be noted that the Devils seem to have a limited number of plotlines in their games, and one type they’ve demonstrated more than once this year is the “score in the first two minutes, then don’t score again in the game”. This is feeling a lot like that.

I think we all know how she feels, the Leafs feel like they play from a limited number of scripts too, most of which begin with giving up a goal on the first shot and then trying to storm back.

As for the main plotline of the negative nancies, that the style of play was dreary, just wait until Thursday night when the Leafs play the Bruins and they see all six Bs players within four feet of the Boston net whenever the Leafs gain the zone. That should make for some nice black cloud write ups.