Where Are They Now? Episode Four

Share All sharing options for: Where Are They Now? Episode Four

This has grown out of a throwaway post that I wanted to use to get comfortable with some of the site's new toys. Little did I know what I was starting. Earlier episodes can be found here (one two three). This is the fourth overall and the second that looks at players that JFJ brought in or kept that are no longer in the NHL. 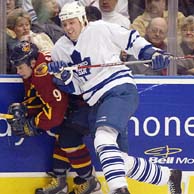 Traded to Toronto by Los Angeles for Adam Mair and Toronto's 2nd round choice (Mike Cammalleri) in 2001 Entry Draft, March 13, 2001.

Obviously, the trade was not JFJ's fault. The irony of hearing Kaberle for Cammalleri rumours is that Camo should be a Leaf. The picture illustrates the saddest part of Aki Berg. He had the size of Luke Schenn but played like Kyle Wellwood. He certainly stepped up his game in the playoffs with the Leafs each year. However, the reason he could do that was because he had monster size that hid his slow-footedness. So what did JFJ do after the lockout? Keep him around.

He's playing for TPS Turku. Having gone there on a free ticket because I was told it was "like" Helsinki let me tell you that if Helsinki resembles Turku then it's no surprise that the Finns are lining up to off themselves.

How did they get to Toronto?

Actually, he came here a bunch of ways but here's the latest and most important one:

The picture above is the player that JFJ thought that he was getting. The guy that had picked up 19-14-33 in 49 games. Of course, the numbers above are what a second rounder and an marginal prospect brought him. Sure, it might not have been a big loss but it's the kind of move that showed that JFJ didn't have the guts to tell the MLSE board that changes needed to be made.

He's an unrestricted free agent waiting around for JFJ to get another GM job and save him from unemployment. 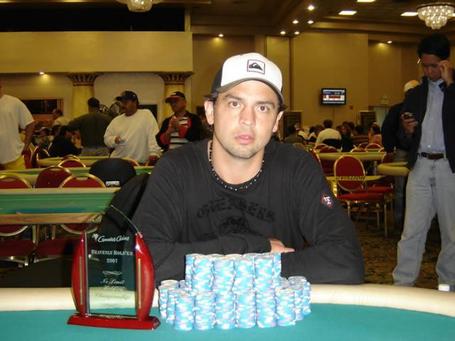 His time under JFJ was actually his second time around. In the first one he was part of the package that saw Danny Markov exiled to the desert. The second time around? Claimed on waivers by Toronto from Anaheim, January 10, 2007.

Rather than fill a gap with one of the Leafs' young forwards (God forbid they get some sort of experience) JFJ decided to go back to the well. The above paints a pretty bleak picture of his contribution to the failed playoff run.

Living the life after playing a year in Switzerland with Zug. He's won over $345,000 in poker tournaments and he's now the Assistant Coach and Assistant GM for the Portland Winterhawks of the WHL. 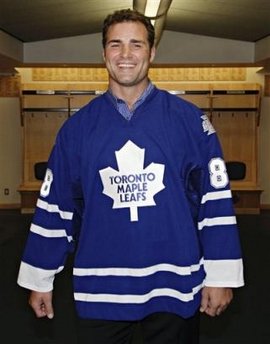 About four years too late.

Look at that picture. That is pure unadulterated joy in that man's face at finally having his dream of playing for his hometown team come true. Who knows what his career as a Leaf would have been like if the flirtation with the Flyers ever moved beyond the tasing stage. The fact that Bobby Clarke was vindictive enough to keep Lindros from going to Toronto opens up a number of 'what if?'sThe Leafs in 2000-2001 would have lost a young Tomas Kaberle and an injury prone Nik Antropov but added another point a game centre who was a behemoth no less. Lindros brought the kind of physical presence that led Quinn to trade Brad Boyes, a first rounder and Alyn McCauley for Owen Nolan. Who knows how the Leafs would have done in the 2002 Eastern Conference Final if they had Lindros. I better stop before I start crying.

Sadly, the Lindros that came to Toronto came even more banged up than the one that made his move to New York. He kept the team afloat after Sundin was felled in the opening game of the season by an errant puck. However, the Leafs horrible medical staff butchered the handling of a wrist injury and cost him the last 49 games of the season. JFJ then unnecessarily lowballed him which led him to play one year as a Star.

Retired without having made near the impact that his potential and early yeas portended. On November 11, 2007, three days after his retirement, the NHL Players Association appointed Lindros to the newly created position of NHLPA ombudsman. 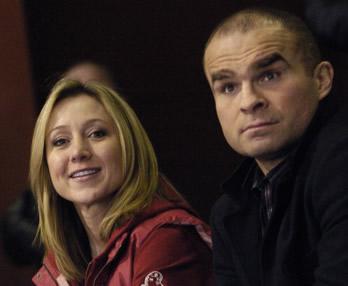 Did you know that he ended up with the Leafs three different times? The latest:

Those numbers are solely from the final year as a Maple Leaf which saw a pretty big celebration of his 100th game. The story goes that Tie had done such a great job buddying up to Tanenbaum that the order came down to JFJ to sign Domi after the lockout. JFJ's failure in standing up to his boss was a sign of things to come as his suggestion to begin a rebuild was shouted down and led to Brian Burke so maybe it wasn't all bad.

Domi was always a fan favourite and it's not too hard to understand why since he was a small guy that fought heavyweights. Sadly, the picture above is one instance, his post-hockey career hasn't exactly covered him in glory.

Still not paying child support but dating an absolute fox.