The Ghost Of You Lingers

Share All sharing options for: The Ghost Of You Lingers 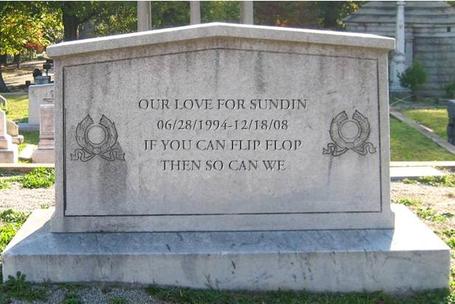 Well, it looks like it is official: Mats Sundin is a Vancouver Canuck.

Naturally, the above reaction will not be universal. I got the news after just after I got home when I checked my e-mail only to find an explosive press release. Since this was Toronto-related and therefore massive news, I decided to check the networks for reaction but only The Score wasn't in the middle of programming. That meant that I had the distinct pleasure of yet another member of the media, Steve Kouleas, displaying complete ignorance about any aspect of being a fan. I have no idea if this is an epidemic spread through saliva or inbred in the media's DNA but being a fan is about supporting your team. Being angry with Mats is completely within our rights as fans.

This will be long so join me after the jump:

First off, here are some truths about the situation:

1. Cliff Fletcher was doing his job to the best of his abilities by trying to trade Mats Sundin.

Cliff Fletcher did not give Mats Sundin a no-trade clause. That gift was John Ferguson Jr.'s. He was brought in to clear the decks for the next GM by moving out veterans and bringing back prospects and picks. The biggest prize he had in his stable was the Leafs' captain. It was his fiduciary duty to do everything he could to get the Leafs the biggest return possible. In the end, the best he could do was get a draft pick from the Habs in return for a limited window of exclusive negotiation.

2. Mats Sundin was acting well within his rights to not only refuse to waive his NTC but to wait until December 18, 2008 to sign with an NHL team.

Mats Sundin negotiated a no trade clause because, in his own words, "I am a Torontonian". He was well within his rights to refuse to move during the season because he didn't want to uproot his child. When he finally did waive the NTC and became a free agent Mats had earned the right through his tenure in the league to wait around all summer fishing while deciding if he wanted to play in the NHL before signing with the only team left in the league that could fit him under the cap without having to ditch roster players.

3. This in no way will tarnish his legacy as the greatest Leaf ever nor does it justify the criminally long-time it took most fans to adore Mats.

Nothing will ever change the fact that over the past 14 years fans have been luckly enough to watch, arguably, the greatest player to ever don the blue and white. As the records have fallen over the past two seasons the segments of the fanbase that were resistant (not me fore sure) for whatever reasons finally acceded to reason but that doesn't change the fact that it took far too long. His supporters (including me) were bombarded with far too many articles and call-ins wondering if Sundin was a leader or if he should be traded which were always ridiculous. The worst of these was probably Don Cherry's ludicrous assertion that Sundin was happy in Toronto because missing the playoffs was extending his career.

4. Leaf fans have every right to be angry with Mats Sundin for not waiving his no-trade clause and for signing in Vancouver. Players come and go but a fan's loyalty is to the crest on the front.

Now we finally come to the part that Steve Kouleas and most of his media brethren are unable to comprehend. When I posted the press release announcing Mats Sundin's decision it hit over 200 comments in lightning speed with strong, STRONG feelings on both side of the aisle but Godd Till's captured the moment perfectly:

GODDAMMIT I DON'T FEEL LIKE BEING RATIONAL RIGHT NOW

Anyone that actually loves a team can understand that feeling. Why else do sports foster such partisanship? If they were about being rational would anyone be a fan of the Cleveland Browns or the Detroit Lions or the ottawa senators or the Toronto Maple Leafs? No, fandom is about emotions and irrationality. That irrationality is what is at the core of most of the reaction to Sundin's signing.

1967ers' Leaf of the Day summarized the rational view point (and I don't want to call it the non-fan view because it's proponents are just as big of Leaf fans as those that are angry with Sundin):

I think people got a little greedy, too, with visions of the package that might have been had for him (we never got to find out what that might have been - the package for Kaberle was actually leaked, that was worse).  I think it's kind of callous to turn on a guy because he didn't want to leave town.  We tend to treat people like cattle.  He's an asset to be manipulated, rather than a person with an attachment to a place and a team and the contractual right to veto a move.  This isn't Vince Carter here, dogging his way out of town and crapping on folks on the way out.  The only thing Mats did was stick to his guns.

Most of the time fans treat players like so much more than assets. We love them, we idolize them, we play favourites, we get in arguments defending them, and all of the time we are reminded by the actions of players that to them the game that we love is nothing more than a business. It happens in every sport as every player signed by a big soccer club suddenly remembers what a lifelong fan he has been or every player suddenly thinks that the Yankees are a contender regardless of their previous year's record.

Fans, I think, are always cognizant of this at some level. Of course, that does not keep us from, every once in a while, thinking that maybe this guy isn't like the rest. Maybe Mats really does love Toronto and wants nothing more than retire as a Maple Leaf. Or maybe he'll go back against a repeatedly expressed desire to be part of a team from training camp in order to help the Leafs' rebuilding effort. Or maybe he just wants to retire and it's just his agent stirring up trouble.

MF37 sent me an e-mail that perfectly summarised all of the angles that will get jumped upon by those upset with Sundin:

Mats is buggered no matter what he says now:

So maybe the truth was that he was just too comfortable in Toronto and didn't feel like being used to cover up the failings of the team's management. Maybe he just didn't want to hurt the fans so instead of saying that he has given his prime to the club and wanted to try to win a Cup (like Cujo did when he went to Detroit and I hated him for it) he told us what we want to hear, that he is just as loyal to the blue and white as we are and that he cannot think of wearing another jersey.

Leafs fans probably feel pretty similar to how Habs fans felt when Patrick Roy uttered his famous promise that he would never play for the bleu, blanc, et rouge before being shipped to Colorado. In the short-term, there will be a massive outpouring of anger for perfectly valid reasons because fandom, more often than not, is about irrationality and wild emotional swings. At least we know Mats won't win the Cup in Vancouver. They aren't even in the top four teams in the Western Conference.

However, a few years from now after Mats has hung up his skates (for real this time) the Leafs will announce that they will be raising number 13 to the rafters. The team will hopefully have found success and fans will begin to remember the good times that he provided us. I'll probably find a way to get a ticket to the game and along with everyone in the building I'll give him the standing ovation that he deserves. Much in the same way that Habs fans re-embraced Patrick Roy the softening of Leafer's hearts will be gradual but at the end of the day the great memories will vastly outweigh the unfortunate way in which things ended and we'll tell the next generation of fans about how we were lucky enough to see Mats Sundin cruising the ice in Toronto, carrying a team on his back, and leading from the front.

Of course, that day will come someday but for now Mats, you are dead to me.