NNN - If a game is played and no one can see it did it happen?

Share All sharing options for: NNN - If a game is played and no one can see it did it happen? 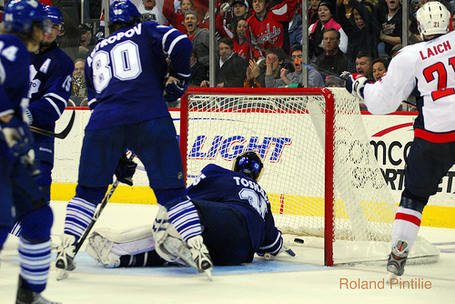 Courtesy of Off Wing Opinion

Brooks Laich's two goals were scored on strong moves to the net - this is how he got to 20 goals last year, and how he's going to get there again this year if he does.

Laich just signed a Poni-like contract for three years. Check out those stats. Those numbers are pretty similar at the same ages. Weird how one contract is a mistake and the other is, I can only assume, hailed as great.

Ian White's 'stache is a joke.

Oh J.P. That's Wendel's Moustache in disguise. Take that back. For your own sake of course.

That lack of production won't be helped by the loss of No.1 centre Matt Stajan for up to two weeks. He suffered a freak eye injury Saturday when he was hit with a soccer ball during warm-up. The Leafs just don't have the depth up front that the Caps are showing themselves to possess with their own mounting injuries.

Put aside the fact that reading that sentence last year would have been considered ridiculous or the fact that Stajan's eye injury is actually ridiculous. It does speak to the difference between the two clubs. It also highlights the long path on which the Leafs have embarked. There will be no short-cuts. Certainly not now that Sundin managed to pussyfoot his way out of town without the discomfort of a dozen weeks in another city which cost the Leafs some rebuilding assets. Or now that the league's leading scorer is not wearing blue and white as he might have if not for Tomas Kaberle's misguided belief that all of his buddies might stick around forever.

There goes my holiday cheer.

Capitals tough guy Donald Brashear, one of the top brawlers in the NHL, attempted to bait Toronto's policeman Andre Deveaux into a fight in the first period, but Deveaux took a pass, no doubt setting Don Cherry up for a rant next Saturday. Cherry has been critical of Deveaux for not fighting, although the Welland native has dropped the gloves at six times since being called up from the Marlies on Nov. 26.

One thing I'd like to see mentioned by people that ostensibly know what they are talking about when it comes to hockey (that includes Cherry) is the subtlety of The Code. Just because a dumb POS old fighter wants to go doesn't mean that the new kid has to oblige him. Back to the ridiculous injury...

Stajan isn't the first NHLer to be hurt during in pre-game soccer. Erik Cole and Scott Hartnell have both suffered ankle injuries in the past and Maxim Afinogenov was taken out with a concussion during similar sessions.

But Burke said he has no plans to ban the practice.

"Let's not overthink this," he said. "Every team in the league warms up this way. I'm not going to eliminate soccer pre-game because one guy gets a ball in the eye."

What are the odds that Howard Berger was the one to ask about banning the traditional warm-up?