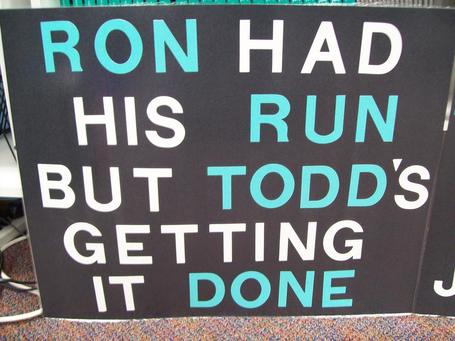 In the midst of all the hoopla surrounding Ron Wilson's return to the Shark Tank after being fired nearly seven months ago, it became all too easy to lose track of another subplot that threatened to slip under the radar: Joe Thornton's third anniversary in Teal.

Lest anyone forget, Jumbo Joe drove home the reminder with 4 points in the first period, sending the Sharks well on their way to a 5-2 victory over Wilson's Toronto Maple Leafs, not to mention a 21-3-1 start, tying the 1943-44 Montreal Canadiens for most points ever in 25 games.

The bright side? The Leafs won 2/3 of the game against the best team in the league!

Of course, that first period was quite the stanza for the Sharks. Joe Thornton showed why the Bruins got a new GM a couple of years ago as he was in on all four goals. How's his year been going so far?

Pretty good. Much like in the Lightning game earlier this year star power played a big part in deciding the game. Now, some of you are familiar with this 'tanking' strategy that suggests that the only way to get a player of that quality is to draft them. Down Goes Brown previously took a look at that theory and found that there is, in fact, more than one way to skin a cat. What does that mean for the Leafs? They need a Joe Thornton and need to exhaust every avenue to get one.

As for the game, here are the highlights for the people that listened on the radio and fell asleep during the third period...

This isn't a game worth worrying about too much. Everyone gets a mulligan. Except Hollweg who blew down the little piggies strawhouse with that wild whiff.

Thanks to everyone that came out until the early morning hours to hang out in the game thread. I am hopefully less than a week away from never missing another one. Until then, enjoy Chemmy and dream of better days.