Why The Leafs Could Make The Playoffs

Share All sharing options for: Why The Leafs Could Make The Playoffs

I know, that's not a very forceful statement but there are a tonne of caveats to any predictions. The most obvious one is that this team, as it is currently structured, could be radically different come March 4th and any predictions should take that into account. Plus "Why The Leafs Will Make The Playoffs If They Don't Suffer Injuries and Everyone Isn't Traded Away" was too long. Anyway, this is beyond just fanboy optimism (it took all of my rational thinking skills to not predict the playoffs in my season preview and fi they make it I'll forever regret not doing it) thanks to MC79's power with numbers.

First off, here are the NHL standings as of this morning 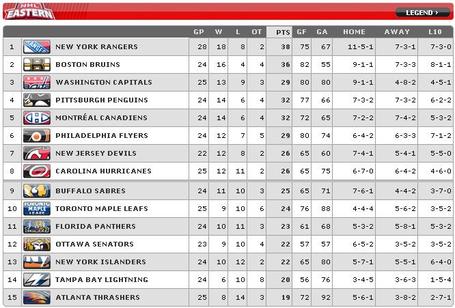 Join me after the jump to find out exactly why I think that the Leafs are looking good for the playoffs.

First, let's take a look at the definition of the stat that should give all Leafs fans some hope:

A while back, Vic Ferrari commented on something he called a PDO number. A PDO number is a team’s ES S% plus their ESSV%. The idea, and I know that this will make some people uptight, is that there’s a lack of sustainability in that number - if it’s high, it’s going to come down; if it’s low, it’s going to go back up.

He takes a look at the top 20 and bottom 20 results from the first quarter from 2003-2004 onward. Those numbers are then compared to the figures over the remaining three quarters of the season. I'll let him take it away: 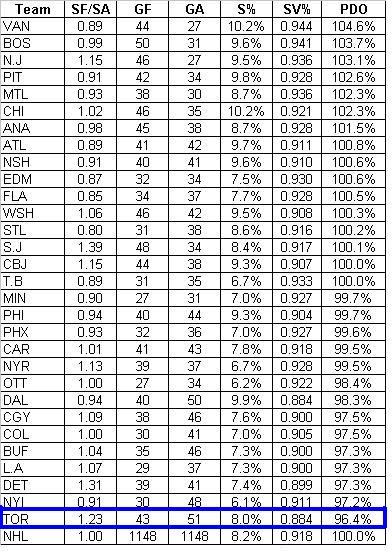 Maybe Brian Burke’s first miracle, as certified by the Toronto press corps (I think we should call them “The Disciples”), will be to push their PDO number towards 100.

And there is also a nice nugget in Matt from the BoA's first comment on the piece. Apparently, this statistic also applies to individual players. It actually has a double shot of good news:

Meanwhile, most Canucks should be expected to have over 100% by simple virtue of their well above average goaltending (pending Luongo’s recovery). However, Willie Mitchell’s Norris Trophy aspirations will probably take a hit when his number inevitably drops from it’s present level of 107.6%. Likewise, count on Kyle Wellwood’s committment to his team and career to be questioned once again when he plummets from 108.2%, where he is right now.