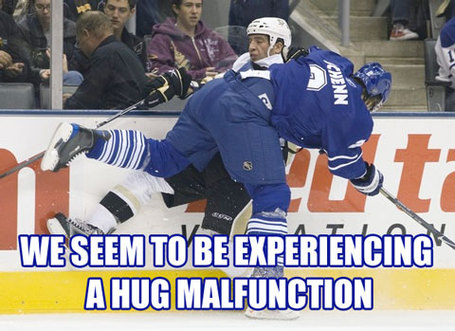 The Penguins' penalty kill has held opposing teams' power plays to an incredible 1-for-21 over four games. - PensBurgh

A fair point, but two of those games were against Toronto, and Toronto's power play is easily identified by its toe tag.

This is pretty disturbing:

For a moment, Ron Wilson sounded just like Paul Maurice.

Of course, the new Maple Leafs coach had just witnessed the same kind of third-period meltdown – where one-goal advantages turn into one-goal losses – that ultimately cost Maurice his job. - The Star

I don't think the collapses lost Maurice his job. I think the fact that Paul Maurice didn't bludgeon a player to death with a stool or stab someone with a shiv he made on the bench during the twelve minutes a game the opposing team's goal horn was going off is the reason Maurice lost his job.

There was much to like about the way the Leafs played the first 56 minutes, especially their defencemen. Kaberle had a goal and two assists and looked like he might be able to rebound from what was a disappointing 2007-08 campaign.

Yeah great the first 56 minutes. If that's all that counted Toronto would probably have been 78-4 last year.

But that's the question. Will this 18-year-old who has gotten better in every game be on this team when the season opens?

"I've just got to keep progressing, keep getting better and learn from all the guys, all the coaches," said Schenn. "It's definitely a change of pace, but I'm getting comfortable."

Prior to the opening of camp, GM Cliff Fletcher said there was little chance of Schenn making the team. Wilson sounds like he's warming up to the idea.

Fletcher, Wilson, MLSE, the guy who sharpens skates at the ACC, listen very carefully to what I'm about to say here:

Luke Schenn is a good player. We all universally acknowledge that. The Toronto Maple Leafs are a bad team. They will not make the playoffs with Schenn in the lineup. Do not waste a year of Schenn's RFA status because he's the real deal. He will also be the real deal after he completely annihilates everything in his way in the WHL. I promise. Please try and appear like you spent five minutes analysing the CBA to determine your future strategy.

It was the spring of 1986, and he and his family were living in the suburbs of Kiev. They were pretty much oblivious to one of the most disastrous man-made catastrophes of the 20th century -- the nuclear accident at Chernobyl -- even though it was playing out less than 100 miles away.

"It was so secret," Fedotenko said. "People in the U.S. and other countries knew before we did. - Pittsburgh Post Gazette

First off, is the Post Gazette really Pittsburgh's newspaper? I'm not quoting that free newspaper that homeless people give out right?

This is supposed to be a "game recap", for a preseason "hockey game" played in "Canada". Thanks for the stirring reminder that Ruslan Fedotenko is probably good at hockey because he was irradiated while sleeping with a Wayne Gretzky teddy bear and that he doesn't ever need to use a nightight to go to the bathroom because his piss glows in the dark.