Good day to the fine folks of Leafs Nation and other assorted delusional types. Lovers of the semi-nude female form will recognize me as HabsFan29 of Four Habs Fans, purveyors of filth and meth humour since 2007. When PPP asked us to write up some thoughts on Habs castoff Mikhail Grabovski as part of the Reading the Tea Leafs series, we jumped at the chance to say "Leafs Suck" on an actual Leafs blog. Now that the pleasantries are out of the way, let's dive into the tortured soul that is Mikhail "Grabs" Grabovski. 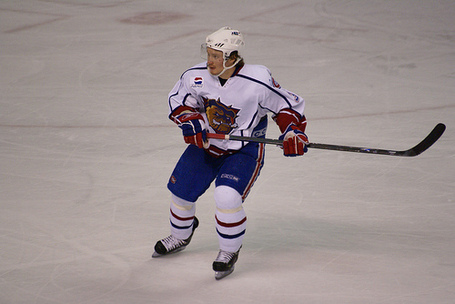 Much easier to find photos of Grabs in a Hamilton uni - he spent alot of time there last seaason.

Starting the season last year, Habs fans had huge hopes for Grabs. He was a talented, smooth skating centreman who gave us the greatest line nickname since The French Connection, because "Kovy Grabs Tits" became the Danse à Dix line (for you unilingual Ontarians, you would find a Danse à Dix at the Brass Rail. And "Tits" is Andrei Kostitsyn). Alas, within a few games he seemed to be out of his league. A boy among men. Hamilton, ho!

He would make it back to the big club some time later and did sort of meh. He really didn't show much, leading him to be in Coach Carbo's doghouse for a while. Back to Hamilton. Then back up. Then one gloriously hilarious day in March, he was benched, and in petulant retaliation he refused to get on the team flight. As Habsfan10 would say later, "Grabs sulked and went against the family." We never forgive. Or forget. Final line for the year? 3G, 6A in 24 GP. That's quality mediocrity.

So here's what you're getting Leafs fans: an extremely talented center, great speed and great hands with all sorts of potential to be great that he has yet to really show. And a head case. Enjoy!