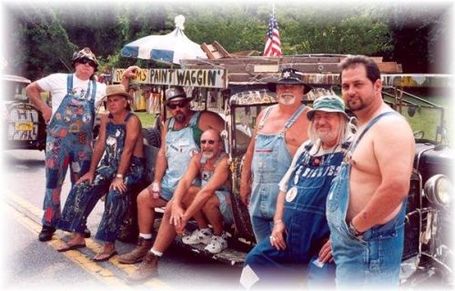 Yes, it's time for some dueling banjos!

Drink it in folks, the Leafs are making their way to Tavares Town one game at a time:

The senators are hilariously following the crooked path of the Leafs' last season when they played their way into the seventh overall choice when they looked set for the top five. Hopefully they can make their way up to 9th in the East.

As for the top storyline tonight, The General gave us the heads up on Paul Maurice's comments about wishing the Leafs ill. Who can blame him right? David Lee, for one, appreciates the honesty as do I. In retrospect, it'll be funny some day to think that the Leafs had a coach so bad that he was the only one whose defensive scheme consisted of an on-ice fire drill.

Carolina has won three straight and five of the last six meetings.

The Toronto Maple Leafs will be the opponent tonight and they are riding a four game losing streak of their own. Sound familiar? Ottawa had a five game losing streak before wrapping up the Canes 5-1 on Tuesday night. Will Carolina continue to be the cure that mends ailing teams?

Hey! Helping team's get over their stumbles is the Maple Leafs' job so don't worry about that three game losing streak cause the Buds have the cure for what ails the Hurricanes. First off, as mentioned in the official preview, the Canes killer Grabovski is out of the lineup for the second of his league mandated three-game timeout.

In simple cheapshot news, Bubba is upset that he has to wait an extra half hour to see the Hurricanes play:

Don’t forget, there is a later than usual 7:30 start time to accomodate our friends in Canada. (Heaven forbid they change their schedule to meet the Canes.)

God forbid we inconvenience a couple dozen people instead of the millions of Leaf fans. No worries though, Smackdown is on Friday night at 8pm not Thursday.

Anyway, back to serious business, the Leafs better not come out listless...again. It's obviously not the end of the world if they lose to Paul Maurice and his flippant comments which we all found hilarious in his first season but I'd hate to see the bags under his eyes light up because the Leafs rolled over for his 'new' squad.